Showtime! The 6'x8' table is out and covered in all manner of fortifications. 3,500 points of mis-lead Imperial Guard are dug in next to their Alpha Legion "allies". Over half of the Alpha Legion lurk in reserve. 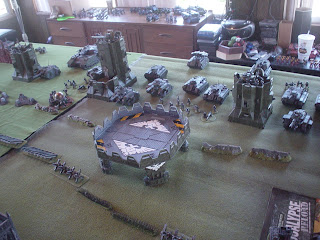 Across the no-mans land of tank traps and razor wire 2,500 of Eldar and the vanguard of the Blood Angel force deploy. Many Blood Angel units and all of the 2,000 point Space Wolf forces await off table. 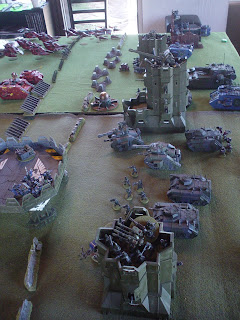 The item the renegade magos has uncovered is an ancient weapon of vast power. (Chaos Doomsday Device, the object on the round base with the gold top in the middle of the table right in front of my big bastion)

The Blood Angels armored strike force head straight for it. The Eldar forces sweep along the left flank keeping a good distance from it. Does Farseeer Gillian know some thing we don't? 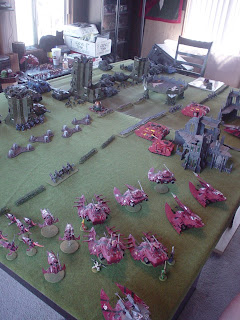 The Blood Angels fire at and damage a Leman Russ MBT, and take out a squad with their Chimera. The Eldar fire at the Doomsday device. A volley from a pair of Wave Serpents with Bright Lances damage it. Twin Pulsars from the Scorpion super heavy grav-tank finish it off. Chaos Lord Pete rolls on the dreaded Chaos Doomsday Device Chart of Devastation and comes up boxcars. Critical Mass! All matter within 6D6 is destroyed. Pete rolls for 24". Big bada-boom. 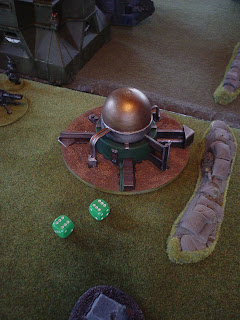 The field before the cataclysmic explosion: 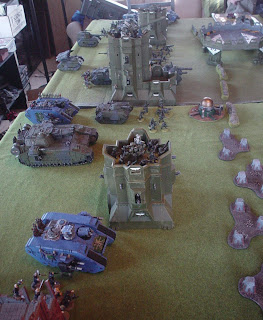 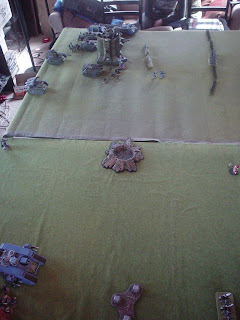 In the expanding mushroom cloud I lost about 2,000 points worth of Imperial Guard and most of the fortifications. Pete had almost 1,000 points of the Alpha Legion sent back to the warp. And Matt had over 1,000 of Blood Angels vaporized. Eldar. Not to be trusted. 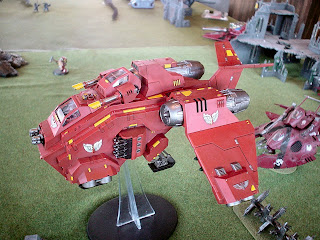 Turn 2 saw the arrival of the drop portion of the Blood Angels and the Space Wolves. The game went on for two more turns, but the combined renegade force was off balance and crushed. Three of the victory objectives went up with the Doomsday Device leaving two deep in the Eldar/Space Marine side of the table. The Alpha Legion took one until Jeff's Wolves arrived at that table edge. 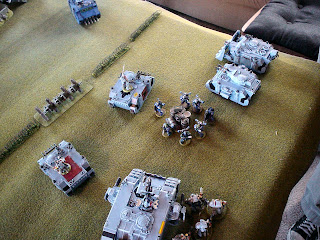 The Eldar were the overall winner. When asked about the slaughter of her allies she replied, "These things happen."

Then we had two pounds of great Carne Asada and booze. It was a very nice day.
Posted by Marcus the Blackheart at 11:47 PM 5 comments: