What Are You Rebelling Against? 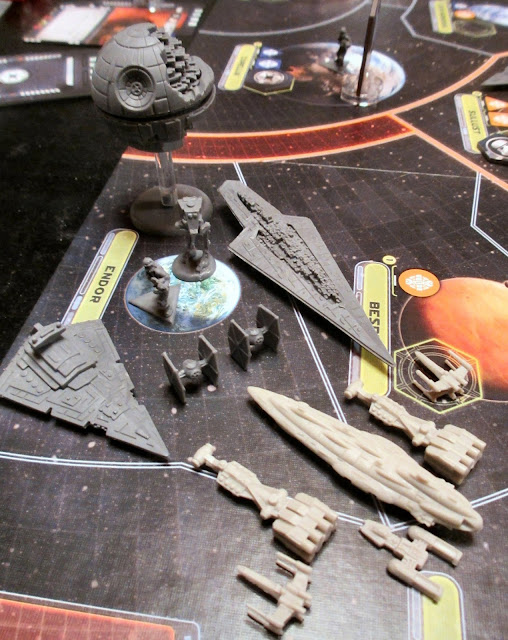 Star Wars: Rebellion is Fantasy Flight's latest Star Wars game and it brings a lot (literally) to the table. It is a grand scale game set right before the events of Episode IV.  It comes with a huge, beautiful, map, and over 150 fantastic plastic miniatures, plus stand-up Leaders, dice, cards and markers. All high-grade Fantasy Flight Games quality. 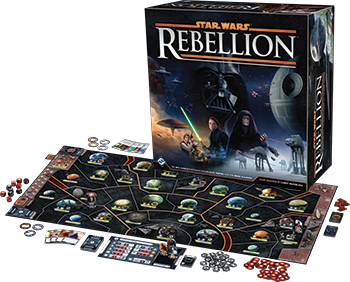 At first glance it looks like a Axis & Allies or Twilight Imperium style conquer-the-galaxy type game. But it isn't. What we have here is a character driver wargame. Each side has a pool of Leaders who initiate all actions. Missions are the heart of this game. Each player gets a hand of Missions cards, which can be as diverse as Starting work on a second Death Star to recruiting allies for the Rebellion.

Gameplay is not complicated, but many hard choices await you. The turn starts with players assigning Leaders to Missions or holding them in reserve to either move units or challenge enemy Leaders on their Missions. Then players attempt to execute their Missions, taking alternate turns to do so. If a Mission is not challenged it succeeds. A Leader who is in reserve can be sent to a System and have any adjacent unit move to that system. Ground units and TIE fighters have to be carried, and all starships have a transport value. If there is enemy units in that system combat is fought. 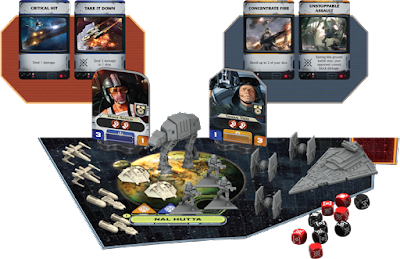 Combat is quick and fun, with your Leaders influencing the battle. The battles are fought in space and on the ground in separate steps, with either side able to disengage after a round of combat.

At the end of the turn the Imperial player gets vital Probe Droid cards which inform where the Rebel base isn't. Leaders are recruited and units get built and deployed. The lager units can take up to three turns to construct.

The game ends when the Rebel base is found and destroyed by the Empire, or the Rebellion gets enough Reputation to start a galaxy-wide revolt and unseat the Empire. The turn track marker moves up the track as turns go by, and the Rebel Reputation marker goes down the same track as they complete Objectives. When they meet the Rebels win. It's very unsettling for the Imperial player to watch the two makers slowly move towards each other.

It is not all fun and games for the Rebel player. Laughably outnumbered at the start of the game they must seek new allies in which to build new units, and increase Reputation.  All without hinting at where their secret base is.

Rebel leaders can get captured, interrogated for information, rescued, and Farmboy Luke can get trained by Yoda and turn into Awesome Jedi Luke. A lot of cool things go on in this game. One of the only downsides is the playtime tends to run long, in the 2-3 hours range. It doesn't drag, there is very little downtime for the players, it just can go for a bit.

In our most recent game, the Rebels got Mon Calamari early and started to produce Cruisers, which the Imperial player disliked. With his fleet tied up fighting the Rebel fleet, he sent that ambassador of good will, Grand Moff Tarkin and the Death Star. Boom goes the planet. Which the Secret Rebel Base was also on. Propper win for the Empire! 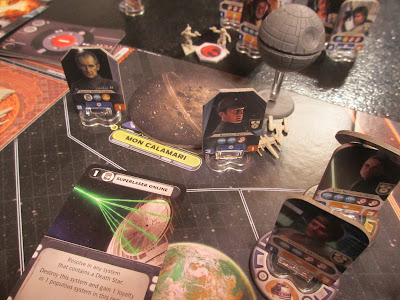 Star Wars: Rebellion is a very good game. It is as playable with 3 or 4 players as it is with 2. The game is easy to get into, and offers lots of choices during play.
Highly recommend.


Go Roll Some Dice
And Blow Up Some Planets
Posted by Marcus the Blackheart at 11:26 AM 2 comments: