Giant Tyranid Monsters All Out Attack! 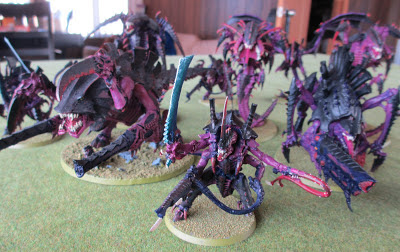 I may have borrowed the title a bit from Godzilla movies. I know I am now in the minority of 40K players; those who want a good scenario over making "The Unbeatable List of the Day". That's fine, I'm done with the tournament scene, I just want a entertaining battle. Not all battles have to be balanced. History has few of them. So here is my first installment of new missions in that vein.

The Mission
Choosing forces:
The defender must take only 1 HQ and 2+ fortifications. No fliers or super heavies. No other FOC requirements.

Tyranid Attacker may only take monstrous or gargantuan creatures. Up to six Spore Mine Clusters may be purchased.

The attacker places all units on the attackers short table edge. Normal reserve rules apply.
Roll a D6, 1-4 the attacker goes first, 5 or 6 the defender has the first turn.

The first turn counts as night fighting due to dense Tyranid spore clouds used to mask the attacking forces.

Game Length:
The Tyranids have six turns to destroy as much as possible.

Victory Conditions:
The Tyranids are here to make a rupture in the line for follow-on forces to exploit. The Tyranids score 5 VPs for the HQ unit, 3 VP for Heavies/Fortifications, 2 VP for Elites, and 1 VP for all others. They also get VPs equal to the number of starting wounds on any monstrous/gargantuan creatures that end the game within 18" of the Defenders short table edge.

The Defender gets VPs equal to the number of wounds on any monstrous/gargantuan creatures they kill. No VP are scored for spore mines. If playing with with the variant, then 1 VP per unit.

Variants:
Allow the Tyranid player to take Gargoyles and/or Raveners (must deep strike), and Lictors.
The Guard player may take one Baneblade, must enter from reserve.


The victory conditions probably need a little tweaking. As we try this mission a few more times I will adjust accordingly. Feel free to add any insight/questions below.

The Emperor Protects
But you must be Worthy of it 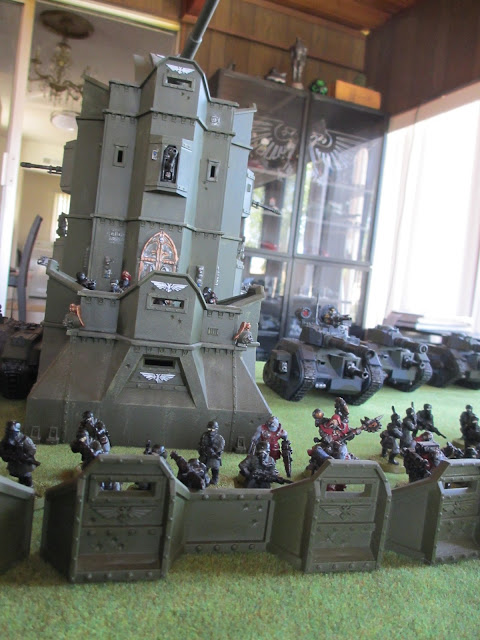 The annual Atomic Warlords' kill fest & BBQ was held on Memorial Day again this year. This year this points total was lower than normal as we tried out a custom scenario named "Giant Tyranid Monsters All Out Attack". That mission description will be in the next post.

Imperial Guard, Defender: I had a Command HQ, a Tech Priest Fun-gineer with his pals, three Leman Russ MBT, three rifle squads & two fire support squads of valiant Guardsmen. Plus a Hydra, Basilisk, and three nice forts behind my defensive line.
Out in front of the line three more Leman Russ, four rifle squads and six Sentinels awaited the onslaught. 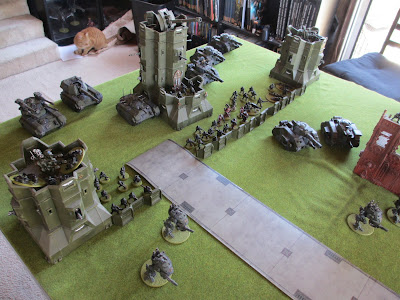 And on the other side of the table was every big 'Nid Mrs. Blackheart could muster. Barbed Heridoule, Swarmlord, 2+ Tyrant, Flying Tyrant, a pair of Trygons, a Maloc, a Tyrannofex, Old One Eye and five of his Carnifex buddies. Good thing I had all those lasguns. 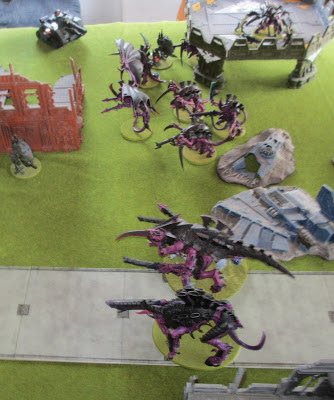 Tyranids went first and things went bad for the Guard straight away. Some good shooting from the  Heridoule killed one tank and stunned another one. A pair of on-target shots from the Tyrannofex erased the Basilisk. Mr. Eye ate a hapless rifle squad. 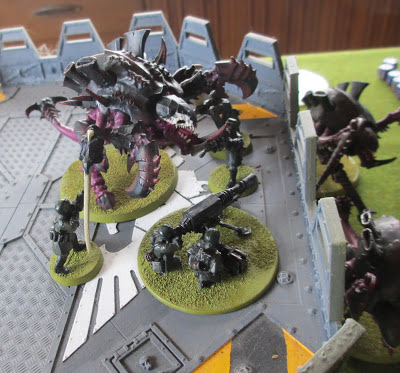 My turn demonstrated that if you roll enough dice even lasguns are dangerous. The Lascannons and Battle cannons did pitch in. No kills but a large number of wounds dealt to the rampaging swarm.

Turn two saw only the flying tyrant show up out of reserves, but another tank, two rile squads, and half the Sentinels were taken off the table. My shooting phase could have been better. I had the "Lots of Hits, no Wound Blues." Still I managed to drop a Carnifex and bring the Heridoule to the brink of death.

Then turn three happened. both Trygons and the Maloc show right were the cunning hive mind wanted them. 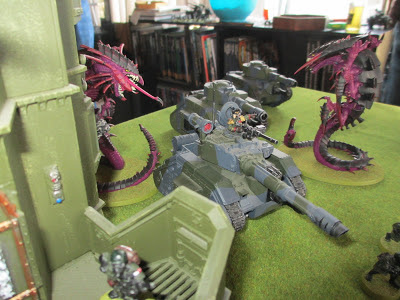 I lost my Tank Ace and his Vanquisher to the Maloc, and lots of guardsmen to the Trygons zapping. I killed the non-prime Trygon, wounded the Prime, and failed to stop the Barbed Heridoule. Turn Four was to be the end. 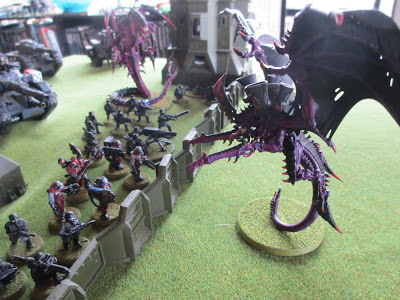 A very fun game despite the guard getting crushed. It is a scenario I want to try again. Both sides are off balance, the Tyranids have the power, but not many units, so each loss hurts. The Guard have many fragile units and heaps of firepower, but have to really work on focusing it.

Thanks to all who could attend, and a special thanks to Dan who made an excellent carne asada after being volunteered to BBQ.

The Great Devourer Feeds!
With chips and salsa

Posted by Marcus the Blackheart at 12:22 PM No comments:

Finally! A turn based PC game

Slitherine and Games Workshop® are pleased to announce Warhammer®40,000®: Armageddon™.

Having announced an exciting partnership with Games Workshop a few weeks ago, Slitherine are delighted to release further details. Slitherine have acquired the exclusive rights to Games Workshop’s “Battle for Armageddon” setting in order to create a series of amazing multiplatform, turn-based, hex-based games. Warhammer 40,000: Armageddon will make full use of Slitherine's expertise in creating compelling and challenging strategy gaming experiences. The initial game is set during the Second War of Armageddon and players will lead the Imperial forces of the Armageddon Steel Legion and Space Marines®from the Ultramarines, Blood Angels and Salamanders Chapters against Ghazghkull Thraka’s massive Ork Waaagh! invasion through over 30 scenarios, on the hostile terrain of the planet and its gigantic Hive Cities.

"It is very exciting to see a game like this come alive - I just can't wait to play it!", said Iain McNeil, Development Director of the Slitherine Group. "It's been almost 15 years since a turn-based strategy game set in the Warhammer 40,000 universe has been released and we think it is now time to deliver that experience to all fans around the world".

“The Battle for Armageddon is a classic event in the lore of the Warhammer 40,000 universe, having been detailed in games, models and novels over the past 20 years.” said Jon Gillard, Head of Licensing at Games Workshop. “Slitherine's masterful use of their classic digital wargame style applied to this seminal setting will delight fans of both.”The game is currently in development for PC and iOS and will release in the first quarter of 2014.

Main features of the game include:
The game portrays the Second War for Armageddon™ in great detail, from the initial Ork landings to the final liberation of the planet;
It contains a large branching campaign with 30 major scenarios, plus additional 5 tutorial scenarios that explore the story in detail;
A complex plot, which can develop during a mission, right in the middle of battle, creating an engaging story line with unexpected twists;
Players lead Imperial troops of the Armageddon™ Steel Legion, with supporting assets from a number of Space Marine chapters against the ferocious Orks;
Fight alongside Commissar Yarrik and Commander Dante against the cunning Ork Warboss Ghazghkull Thraka;
Carry over battle-hardened veterans from scenario to scenario, using their experience and upgrading their equipment;
Detailed combat model with terrain, weather and morale effects;
Extensive modding options delivered through a powerful and easy-to-use game editor.

Some numbers:
Over 35 scenarios;
Over 100 unit types, with unique roles, stats and special abilities;
20 different units stats;
A separate set of maps are designed and balanced specifically for multiplayer via Slitherine's PBEM++ system.


It has been a long while since the last 40K turn based PC game. Well, there has only been three, and one for the PSP.
My big question is what scale will it be? Epic scale action with Titans and such like the beloved Final Liberation? Individual soldiers like the fun but buggy Chaos Gate?

My bet is a sort of abstract company-ish level game like the fantastic Rites of War, which is based on the legendary Panzer General. And Slitherine just did a well done remake of Panzer General caller Panzer Corps. I'm thinking they use the game engine and 40K it up. That would be fine by me. We will see in a few days if they show anything at E3.

The Emperor Protects
Even on your PC