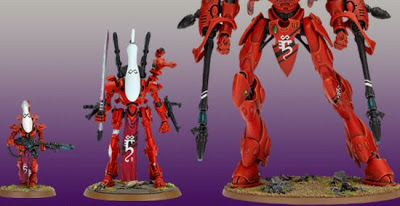 So I was at a local game store picking up June's White Dwarf when I was approached by a fellow gamer who asked me what I thought of the new Eldar Wraithknight. ''Impressive," I said, being a person seeking to revitalize my Ulthwe army.

Mr. gamer then launches into a tirade about how he will use three to destroy all that oppose him. I nod and get into line to make my purchase and escape. Now gamer #2 enters the one sided conversation and decries the Wraithknight as totally overpowered and will ruin the game. This is still seven days before the Codex will be released, so it's stats and how it will really do on the field are yet to be seen.

Facts aside, these are good points. A near Titan level unit as a regular heavy choice. Scary. But will it be the auto-win unit? I somehow don't think so. No more than a Blood Angles army made of deep striking Land raiders. Good once, but then you are just a expensive one trick pony vulnerable to melta weapons.

Regardless of how the Wraithknight performs it is a good looking model and I suspect I will wind up with two in my house; one in black and bone for me and a red and black for Mrs. Blackheart.

I do think 40K is moving a bit further toward being a shooting heavy game. For me the real test will be how they handle the Tyranids and Orks.

Posted by Marcus the Blackheart at 12:30 PM 3 comments:

We have all seen the growth of 40K cosplay and have noticed the increasing skill level. The You Tubes are packed with (mostly) awesome efforts. Check out this Imperial Fists Terminator for example.
But this guy, he just nails it. The fully articulated power fist is a hell of a thing.
The video itself is not great but has some funny moments, like his interaction with the convention folk, and the annoyed looks he gets from a few 40K players as he walks into the gaming room, and power fist massage? probably not the best idea.

The Emperor Protects
Even cosplayers.

Posted by Marcus the Blackheart at 12:35 PM 2 comments: