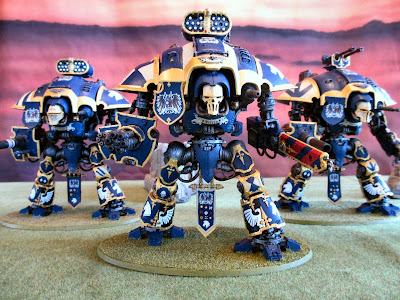 I just finished my Imperial Knights upgrades. I built and painted a Baron in a Knight Warden, and did some various up-gunning to my three existing Knights. Even though it was just fourteen months since the first Knight Codex came out, a lot has changed in the 40K landscape. The new Codex is bigger, with more artwork and painting guides, not to mention three new Knights and five new weapon systems. New Warlord traits and a handful of relics make the new Codex a worthwhile upgrade.

The addition of carapace weapons are a significant improvement for the Knights. It gives them a much needed Anti-aircraft weapon in the form of the Icarus Autocannons.  The two types of missile launchers helps out with light armor threats and/or large squads of infantry.

The new Knight Warden kit comes with all the parts needed to make all the variants. And as a bonus, the two carapace weapons are complete, so you will have one left over to add to a older model.

Keeping with my House Terryn theme, I wanted to make a Baronial Court with four knights, one of each shooty type. Sorry, Gallant, but who the hell wants an all hand to hand Knight? 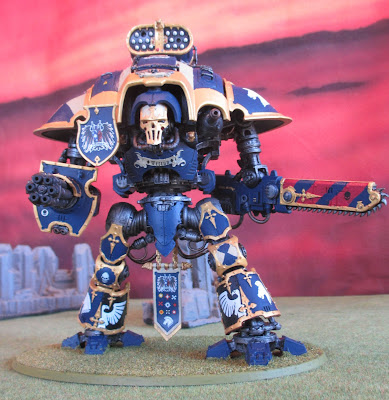 So my new build, the Baron. I really like the few new bits: Meltagun, fancy tilting shield, and of course the Avenger Gatling Cannon (with built-in Heavy Flamer for the kids!) I did the decals the same way as I did for my first three and had very good results this time too. 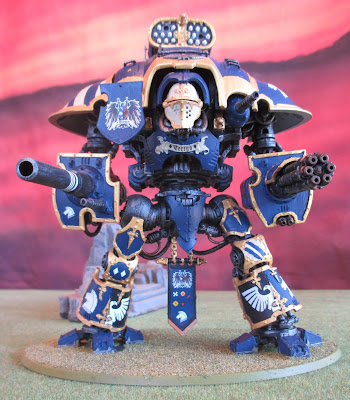 My Crusader started out as one of my two Paladins, after a slightly stressful job of removing the chainsword from the left shoulder/arm joint, I replaced it with an Avenger cannon and added a Stormspear missile pod up top. 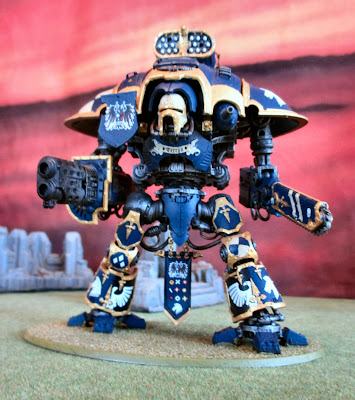 The Errant has the least amount of work done to it, new faceplate and a missile pod and done! 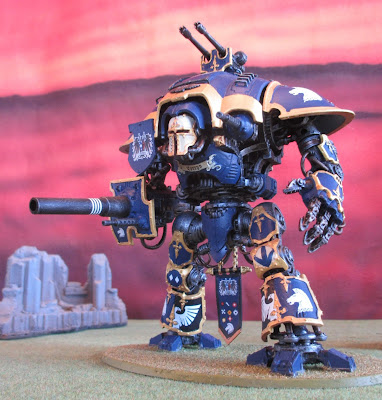 The remaining Paladin had a left arm upgrade as well, I just had to put the Thunderstrike Gauntlet on one of the Knights. I swapped out a Heavy Stubber for a Meltagun and dropped on the autocannon mount to complete the upgrades.

The Baron's Lance comes out to a nice 1745 points. Time to see who is can take it on.

Next up, we play the new 40K-themed board game, Forbidden Stars.

The Emperor Protects
Because Giant Robots

Posted by Marcus the Blackheart at 9:32 AM 4 comments: 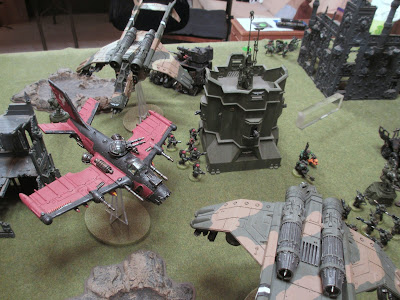 We played a Sanctus Reach battle  a few days ago. Mission 10: "Klaw of Gork", a small Imperial Guard strike force must destroy a Ork force field projector so a larger force can attack the traktor beam that is bringing an asteroid down to impact on top of the Guard's mountain fortress.

Three Valkyries, two stormtrooper squads, and a stormtrooper HQ with Commissar Lord comes out to a nice 1200 points. To counter this assault the Orks had three mobs of boyz, a battlewagon, a pile of grots workin' on the force field generator, with a Burna-Bomba in support lead by a Big Mek with his burna boy buddies. The Orks also received a pair of anti-aircraft quad guns, left by the previous owners.

The game was fast and bloody. Some fine shooting from the Guard thinned out the Boyz enough to make a direct assault possible. 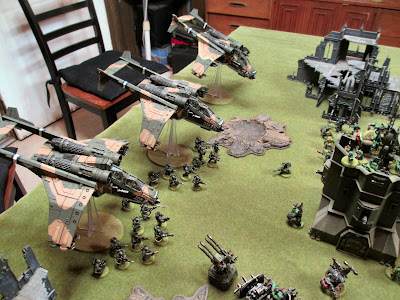 The Boys crashed into Bravo squad and killed them over the course of two turns. The Big Mek had the misfortune of being hit by a meltagun firing on overwatch, and that was that for him. 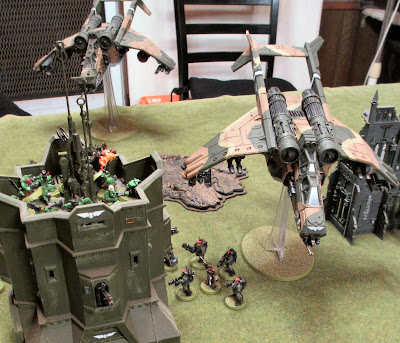 What is the best way to clear out a building full of Orks? Blow it up with the power of Melta. That is what the HQ squad did immediately upon exiting their Valkyrie. The rest of the Orks were routed and the Stormtroopers won the day. The mission was very fast and fluid, and a bit rough for the Orks, but that is what they get for dropping rocks on people.

The Gargant Project is still underway! Go have a look at its progress over at  In The Grim Cheapness of the Future .

Next up, yet more Knights!


The Emperor Protects
And Valkyries do His Work

Posted by Marcus the Blackheart at 9:28 AM 2 comments: 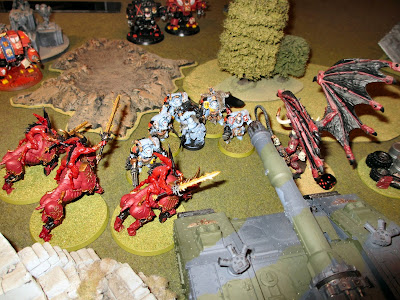 4,000 points of Khorne aficionados with 2,000 points of  liberated IG penal legion versus 2K each of Space Wolves, Eldar, and Blood Angels. What does that equal? Epic bloodbath! Atomic Warlords annual BBQ and kill-fest took place and it delivered the goods.

We played a large game of 40K (as opposed to Apocalypse) on a 8'x 6' battlefield with six objectives scattered around the board and one big summoning objective in the center. Victory points were scored at he end of each player's turn, 1 each for the small ones, and three for the big one, plus one for the each sides warlord killed. This kept the objectives simple and the game fast moving. Which it was. 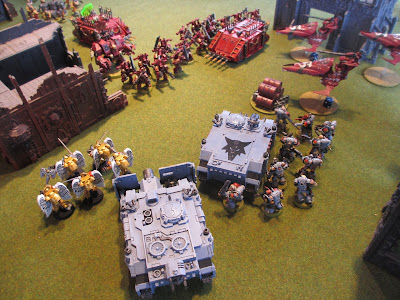 I have was having too much fun and did a terrible job at documenting the battle. Sorry, I have a kunning plan to do better battle reports in the future.

Here are the highlights!

The Marine/Eldar alliance went first and did a good amount of damage to my troops. I lost a Land Raider to a single hit from a Space Wolf Predator and the Brass Scorpion went down under a barrage of Bright Lances.

Pete's Psychic-heavy renegades did an outstanding job throughout the entire game, and summoned all manner of Daemon fun to the table, including a Bloodthirster. He only had a few psykers turned inside out from Perils of the Warp. 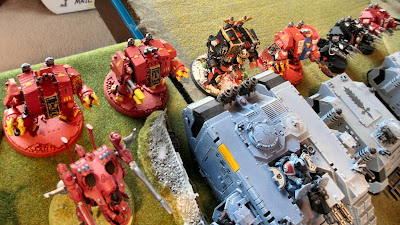 Matt brought a Venerable Host of six(!) Blood Angel dreadnoughts, quite an impressive sight, however a first turn traffic jam delayed their arrival at the center of the action.

Jeff's Space Wolves charged fearlessly into the center of the battle and held the summoning circle for two turns. It took 3 squads of Berzerkers, a Heldrake, and the Lord of Skulls to dislodge them.

Mrs. Blackheart's Eldar shot up my forces, but her Cloud Strike formation of Flacons loaded with Aspect warriors kept rolling ones to arrive. When they finally did arrive on turn three they blew up the renegade Shadowsword, my Predator, and a squad of Berserkers. But it was too late. the Forces of Khorne had built up a large lead in VPs.

The Lord of Skulls definitely had Khorne's favor that day. It took a couple of D hits from the Wraithknight before taking said Wraithknight apart in a hail of gatling cannon fire. For an encore it then fought off three Blood Angel dreadnoughts. 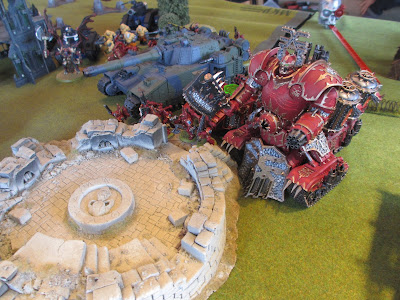 After four turns the game was called in a Chaos victory, with quite a kill tally on both sides. It was one of those games that could have easily gone either way, with a few key die rolls making the difference. We all had a good time and the Carne Asada was delicious.


BBQ for the BBQ God!
Skulls too.