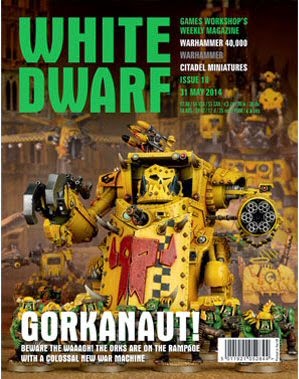 The Orks are officially upon us and leading the way is a new heavy dread creation. I was put off at first by the yellow paint job, but I like it. It is blocky and brutal looking, right on the line between comical and intimidating. Of course I already have a good size Dread Mob so it will fit right in.

For the points of a Land Raider what do you get? Armor 13, 5 HP, and a lot of dakka. It has a transport ability of six which may be good for getting your warboss/Big Mek closer to the action in style. The way the two different versions pay homage to their different Gods is a nice touch. The Gorkanaut is a bit more brutal and of course the Morkanaut is a little more Kunning with it's weapons load out and the ability to get a kustom force field.

Hopefully this a good portent for the upcoming Ork releases. It does seem to follow the recent release pattern: One big new kit, and re-do a few old ones and repackage the rest. We will have to see which of the rumors ore correct. I am hoping for new buggies and Mega-nobs.

Beware the Hand of Gork
Mork too. 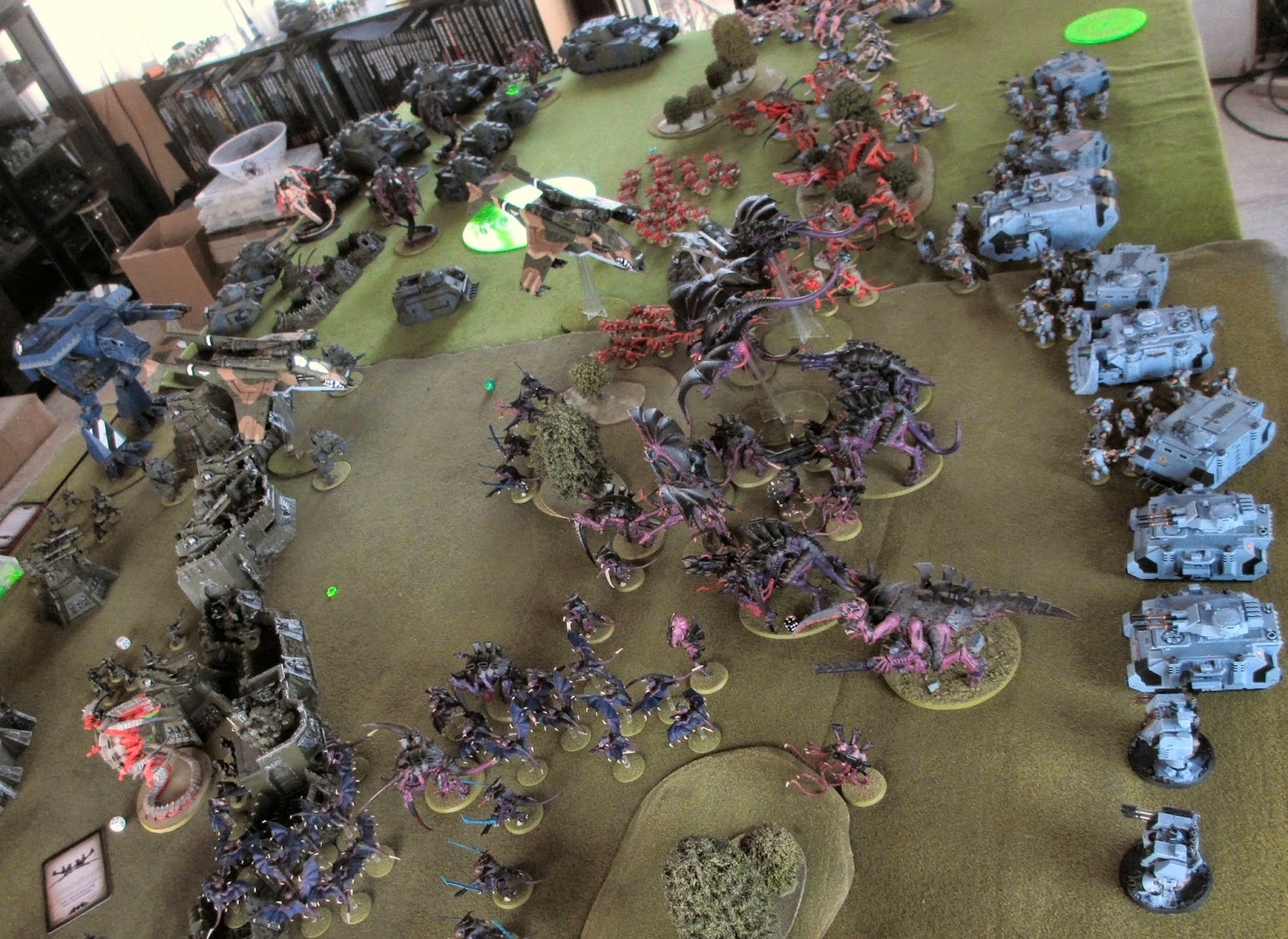 On Monday we had our annual Kill-fest and BBQ. We played the largest sized Apocalypse battle we have ever done with 10,000 points per side. Three Tyranid players vs. a Guard and a Space Wolf player. The sight of all those well painted figures on the table at one time was truly amazing. The down side was it took a very long time per turn, and the mission I had picked turned into the exact opposite of what I intended.

I had wanted a more dynamic mission that would not expose as much of the current handicaps the Tyranids have versus a shooting heavy army, such as an Imperial Guard army with three "D" weapons on the table. It quickly turned into "line-up-and-shoot-the-hell-out-of-the-Tyranids" kind of game. It was still fun, but frustrating for the Tyranid players. So I take full blame for that, and thank Pete, Matt, and Mrs. Blackheart for being great sports and gallantly charging in regardless.

This was our last game under the Sixth Edition rules, and since Seventh did not really help the 'Nids out much we are looking at a few house rule changes. Notably the ability for Fleet units to run and assault. More on that in the next few weeks. Now for some pictures! 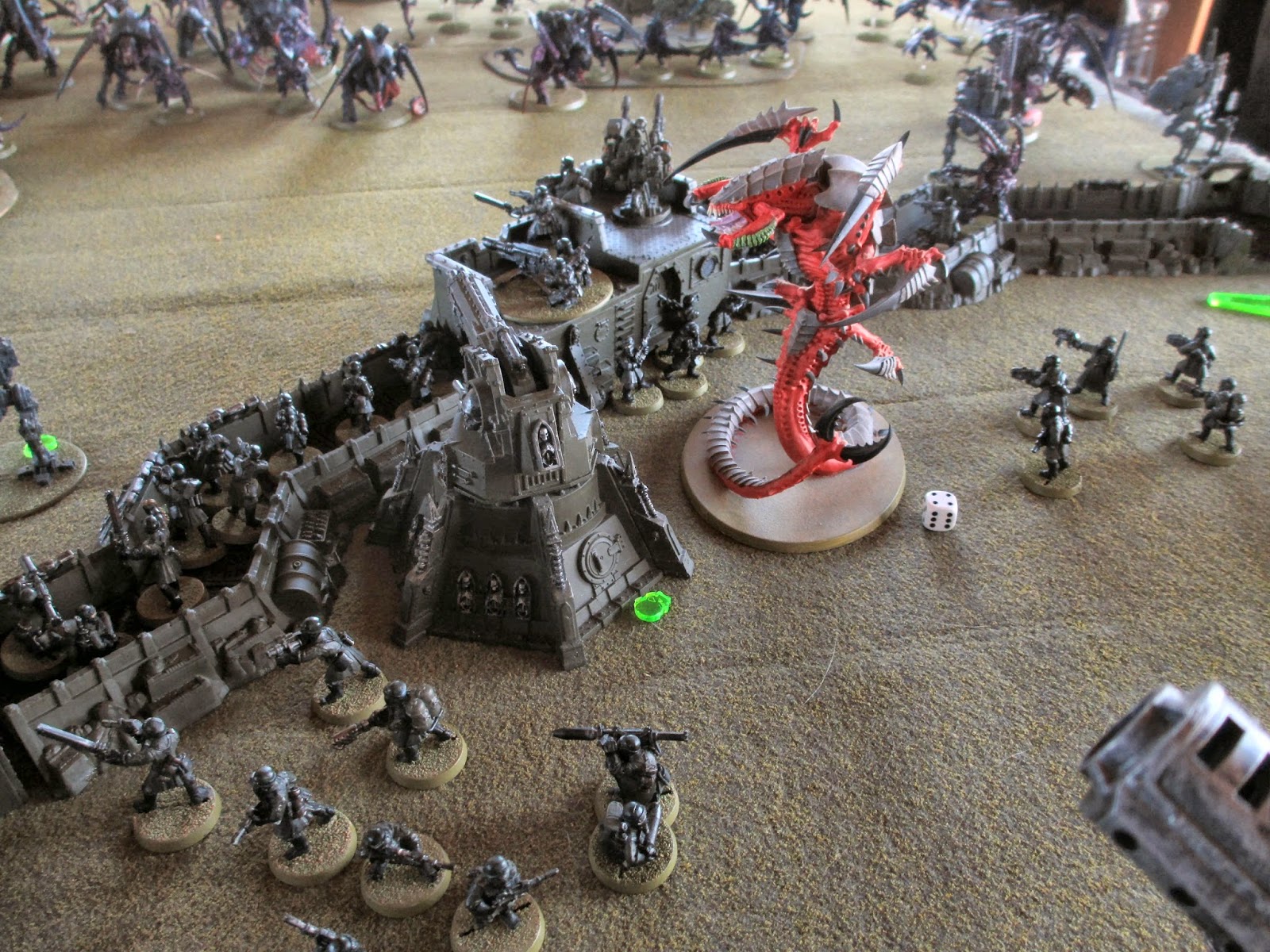 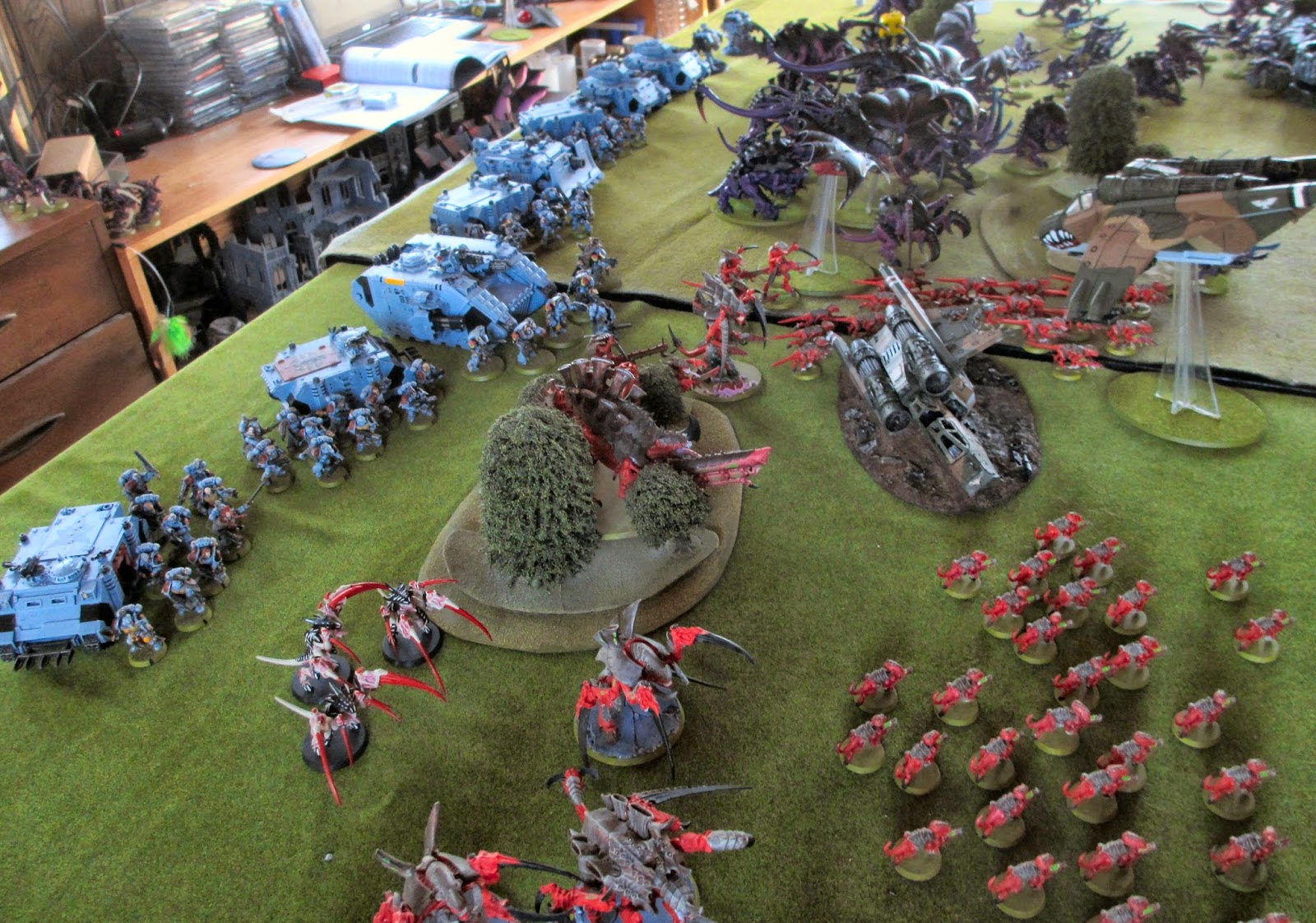 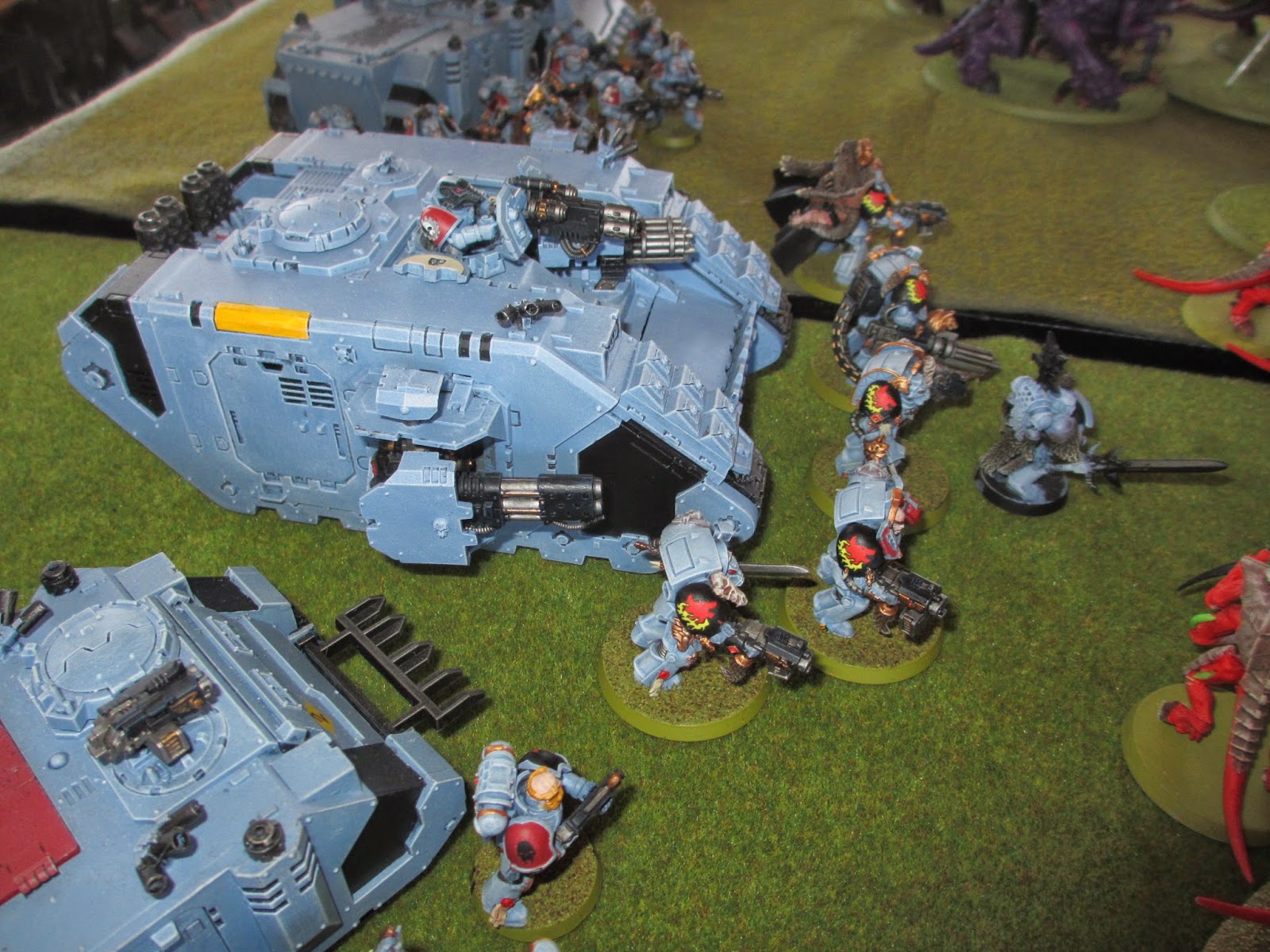 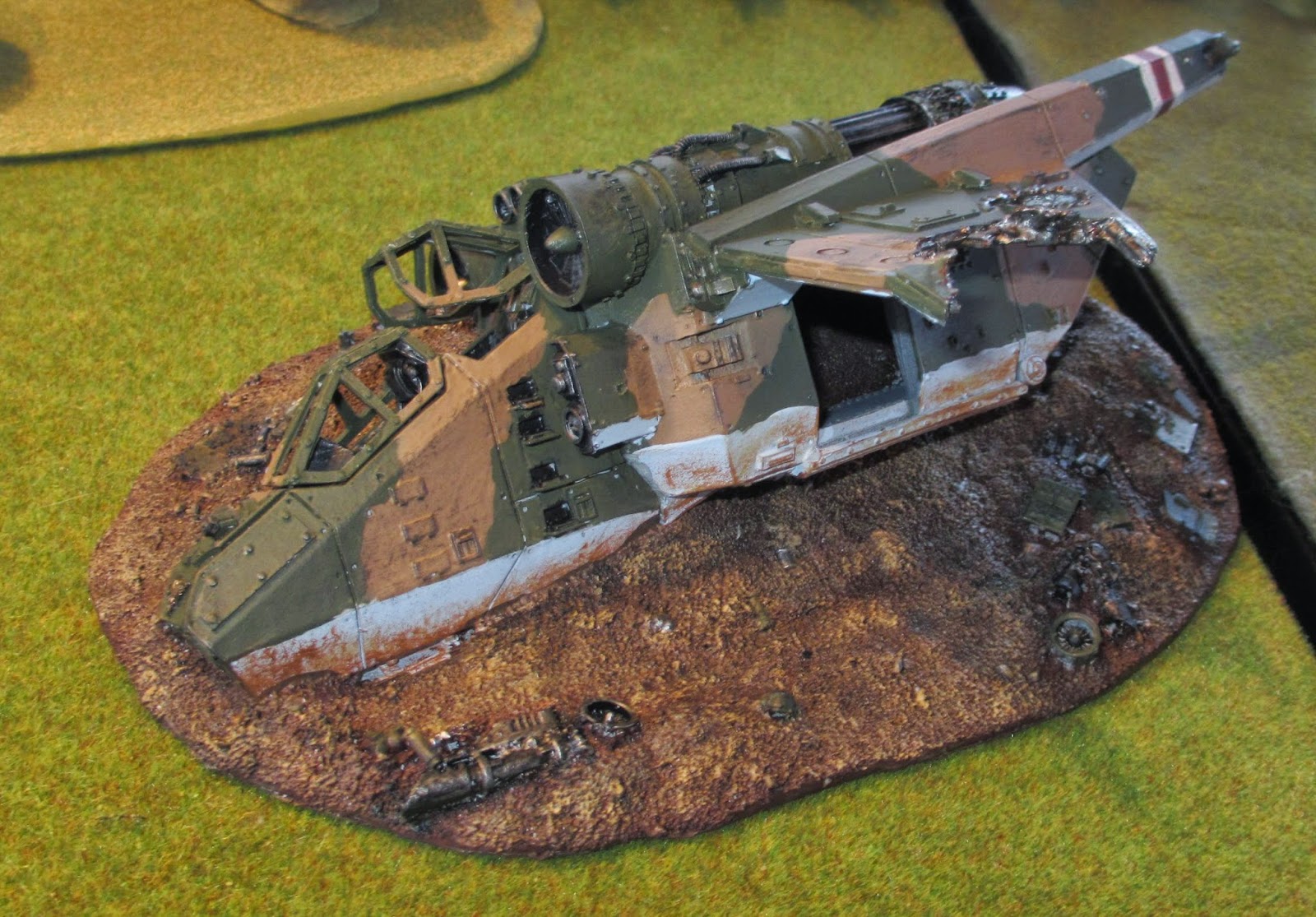 As usual, I was having too much fun and rum to remember to take enough photos, or to make sure the "awesome" shots I was taking were in something approaching focus. Which most weren't. I will try to appease the Machine Spirit better next time.

Overall, it was a very good time; socializing, rolling dice, eating great Cane Asada, and  hanging out with my friends. Which to me, is the point of holidays. So thanks to all the Atomic Warlords for a excellent day.


The Emperor Protects
And Invented BBQ

Posted by Marcus the Blackheart at 2:38 PM No comments: 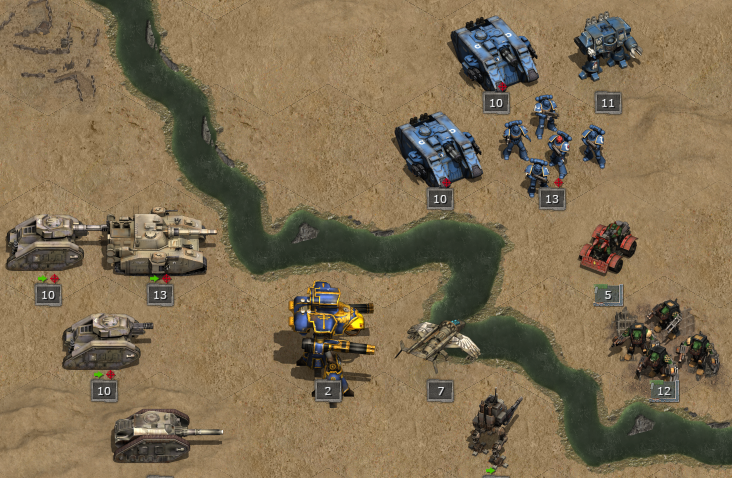 Slitherine Ltd had their annual press conference a few days ago to discuss and show upcoming projects. Finally the veil has been removed from Warhammer 40,000 Armageddon, the turn based wargame that we have all been waiting for. It is similar to the great Panzer Corps game but at a smaller scale. All the units have been rendered in 3D, so they will have six facings as opposed to Panzer Corps units only facing left or right.

The designers have put a of lot of care in "getting it right" and GW has signed off on each 3D model. The game will ship with a 30+ mission branching campaign, a scenario editor, and will support PBEM. Several expansions are already planned. 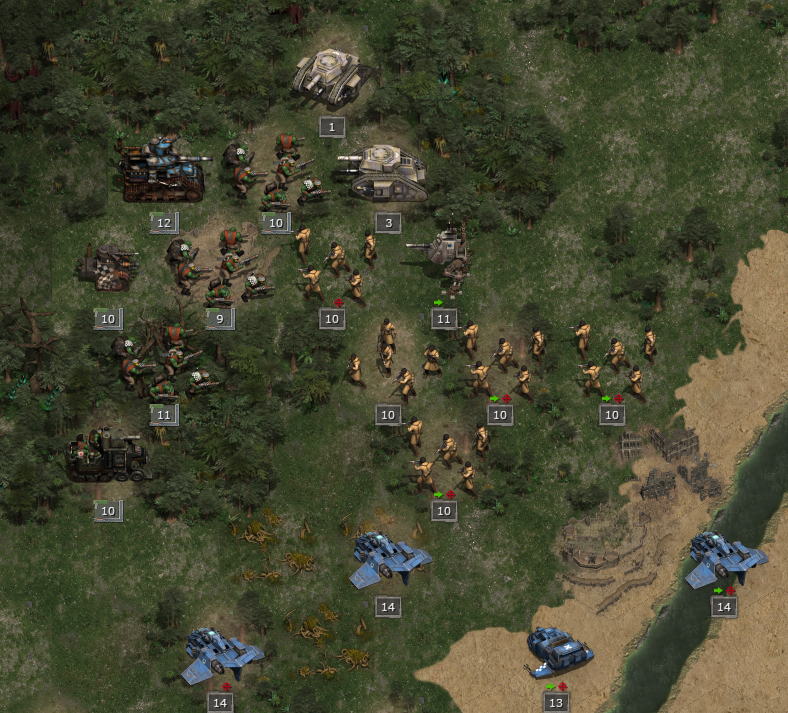 Currently due for release in 3rd Quarter on PC and iPad, with other formats to follow. This looks like the successor to Final Liberation/Rites of War that we have been waiting for. Hopefully this will be the launch of a strategy franchise. I'll be following this game closely and will post any new developments.

The Emperor Protects
Even against virtual Orks


Posted by Marcus the Blackheart at 11:10 AM No comments: 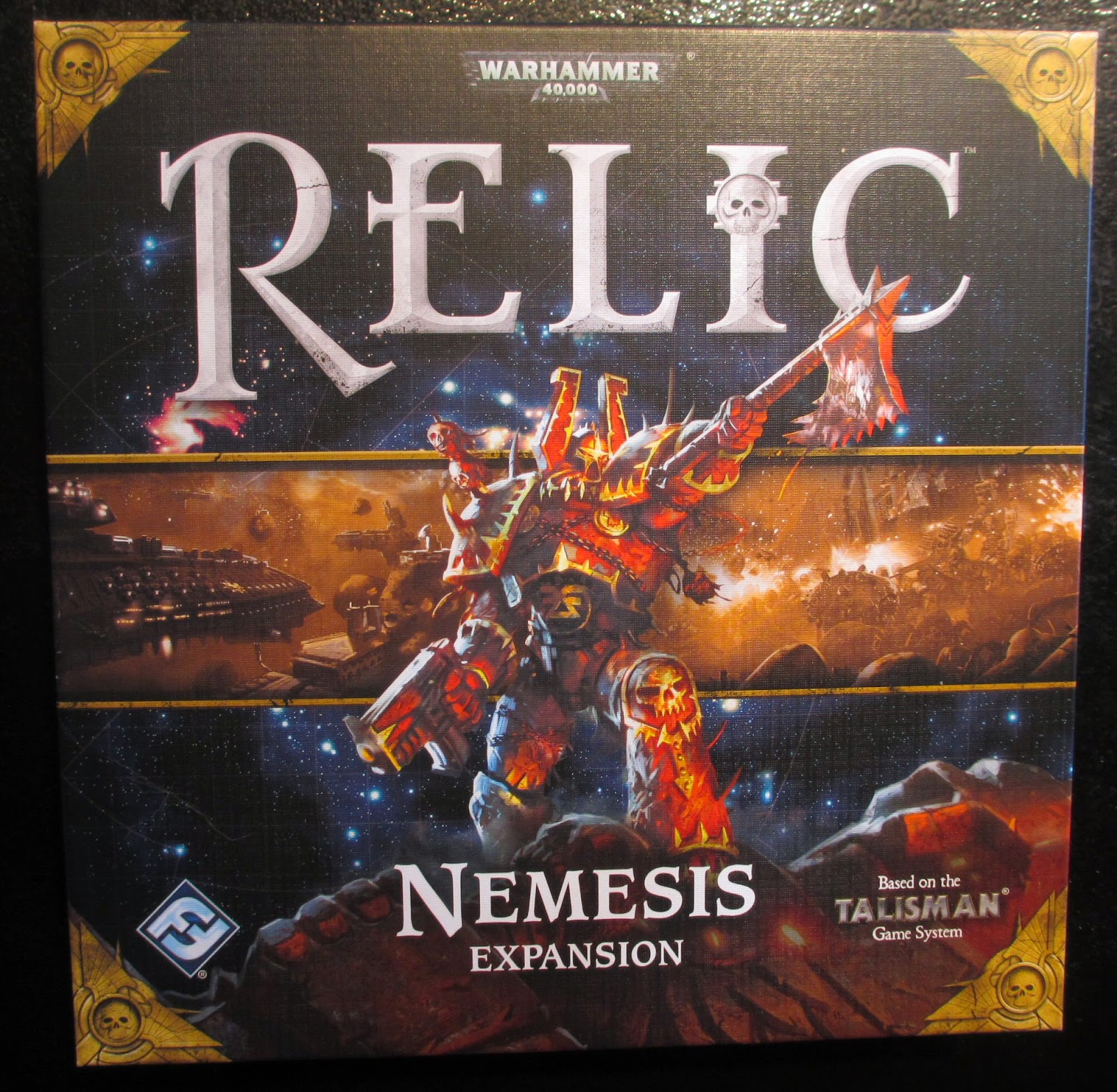 The expansion for the Relic boardgame has arrived and it looks good. Produced to the high standards we have come to expect from Fantasy Flight Games it adds lots of new stuff to an already strong game. The main focus is the "Enemies of the Imperium" game mode where one player (or two in a five or six player game) takes the role of a Nemesis and works against the other players and has different victory conditions.

Giving the rules a read through this seems very straight forward and interesting. The Nemesis player gets four character choices: Khorne Berzerker, Slaaneshi Damemonete, Genestealer Broodlord, or Eldar Dire Avenger Exarch. Each has their own Nemesis deck of fun things and encounter Imperium forces on the main game board. And of course they may fight the other players.

Actually, any players may now fight each other if they have become an Apostate. This happens if/when your character takes one of the new Apostate asset or relic cards. Fun and powerful, but just a bit on the evil side. 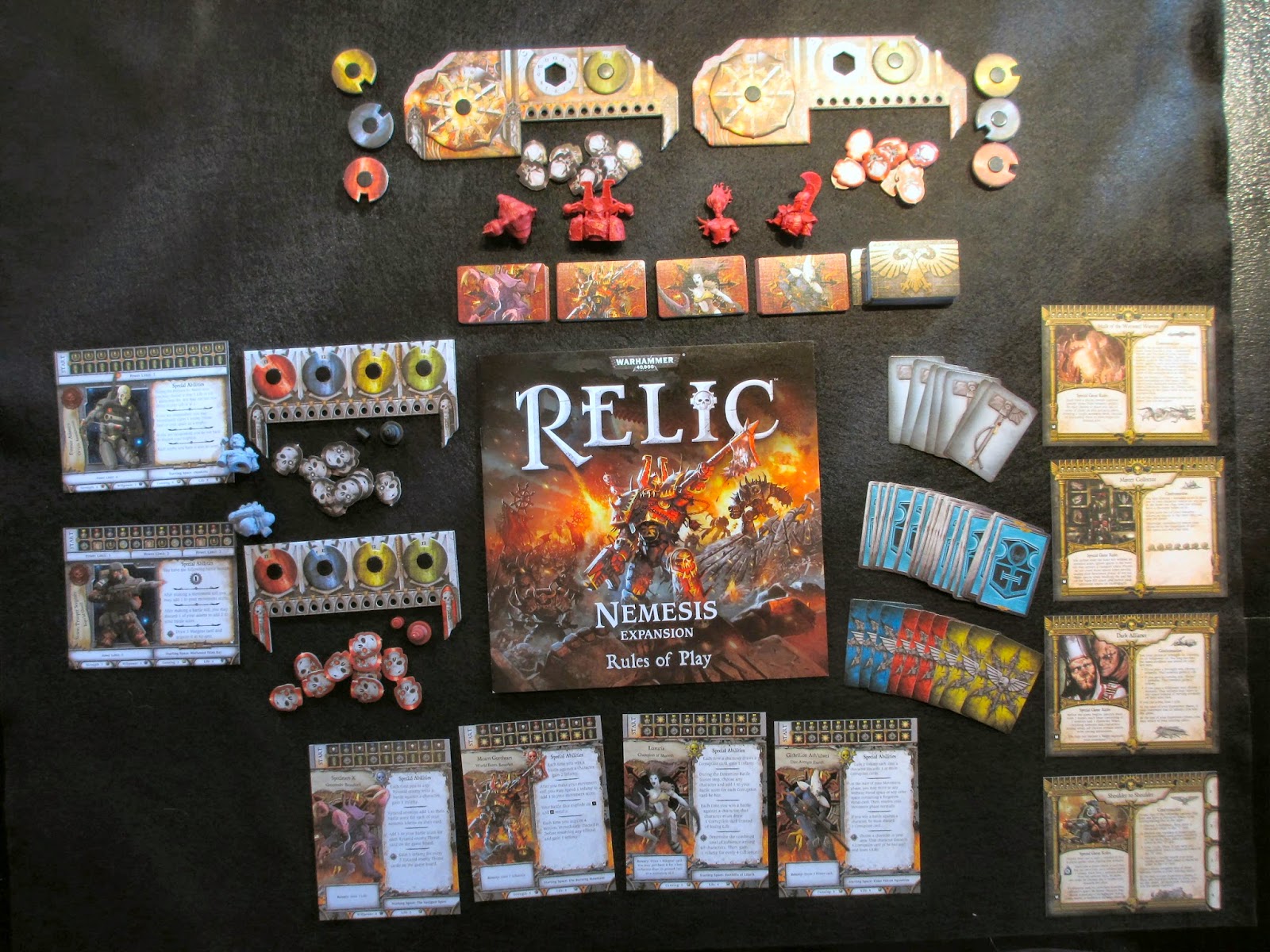 All manner of new goodness. The four Nemesis and all their cards and boards. A slew of new cards: four scenarios, 7 relics, 24 wargear, and 9 threats. Two Imperial characters (Eversor Assassin and Storm Trooper Sergeant) plus the boards and tokens to expand to a six player game. 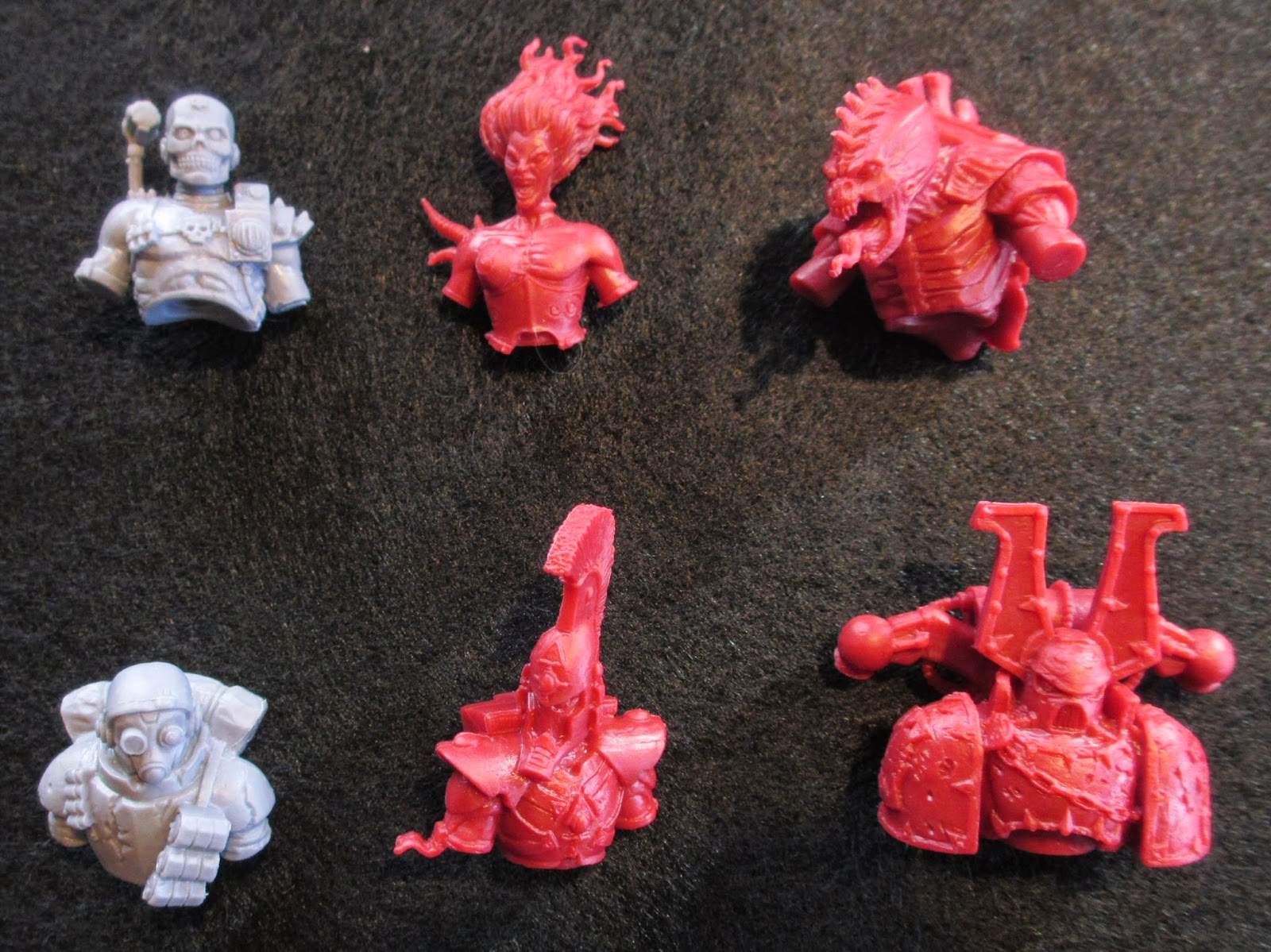 If you enjoy Relic this is very close to a must-have expansion. Even if PvP is not your thing it adds a lot to the base game to be worthwhile.  Hopefully we will get it on the table next week and see how it plays.


The Emperor Protects
In all forms

Posted by Marcus the Blackheart at 10:56 AM 5 comments:

Peeling back the curtain just a bit 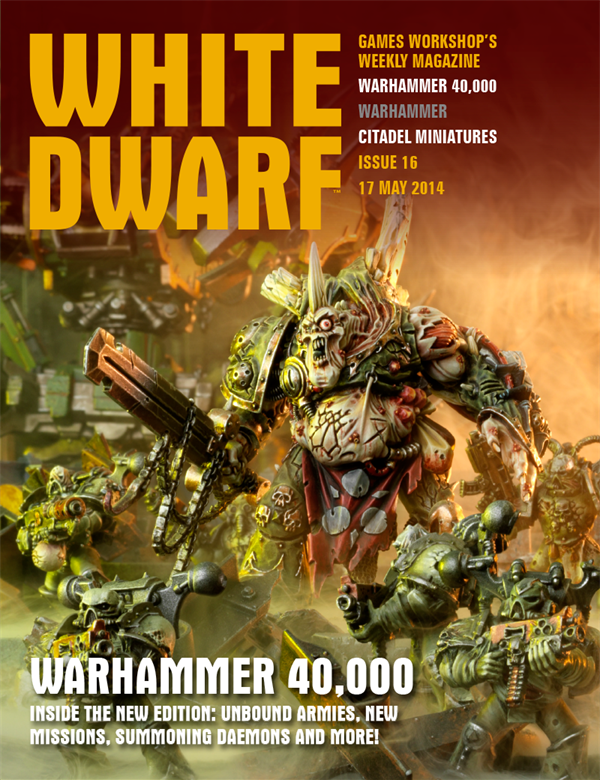 This weeks White Dwarf has good deal on the new edition of 40K. So much for it being just a clean up of 6th. Well, no more than 5th was a revised 4th and all. Call me a overly optimistic fanboy but I am actually really looking forward to 7th edition, starting with the throwbacks to second edition, the three book rules set and the Psychic phase. I love all the fluff and pretty pictures in the rule books, but the phonebook sized 6th was so heavy and unwieldy when trying to using in a real game. Just having the rules in a mere 208 page book will be so much nicer. Or on my tablet, choices, choices. At any rate, the three hardcovers in a slipcase is a great idea.

We will have to wait and see exactly how the new psychic phase works, but it sounds solid and something that will add to the game without putting much drag on the turn structure. Daemonology sounds fun and a real boost to the fans of the ruinous powers.

The new missions set seems very dynamic and should be entertaining. The other huge change is of course, the Unbound army selection. Sounds like a lot of fun, providing you don't play with total smegheads. And even then it should be good for a laugh. Used responsibly it will allow for interesting battlegroups that exist in the fluff but cannot be made using the existing FOC. Like my all assault squad army that is coming to to a table soon, or a "proper" Ork kult of speed. Oh, the possibilities.

I want to wait until next week when I have the rules in hand before I yap about the rules tweaks.

Posted by Marcus the Blackheart at 2:03 PM 2 comments: