Back in the Blood Bowl 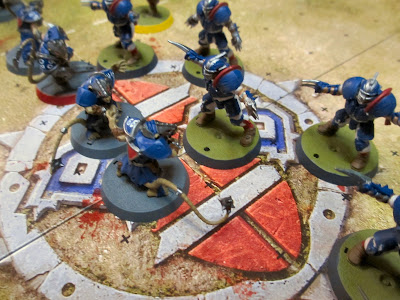 As Jim & Bob would say, "We're back for another exciting season of Blood Bowl!" of course it has been about twenty years since I last played BB on the tabletop. After a very long hiatus, The Game of Fantasy Football is back. Real Fantasy Football with dice and Orcs, not to be confused with  spreadsheet jockeys who fantasise about "owning" real NFL players.

The big question about Games Workshop returning to other games is..is it any good? Happily the answer is a resounding yes. The miniatures are great, the board is great, and the rulebook and supporting items are great. And for a smart extra bonus, they kept the rules the same! There may be a few very minor tweaks, but it is classic Blood Bowl, thank Nuffle (BB dice deity). 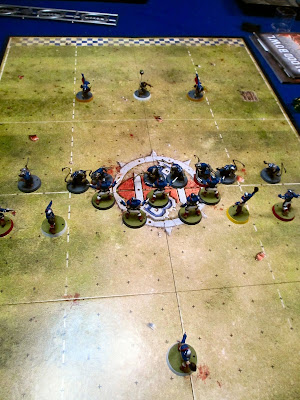 Playing BB with two painted teams is quite a satisfying experience. And it is pretty easy to get there, a full team roster is only sixteen players, so they paint up quick. 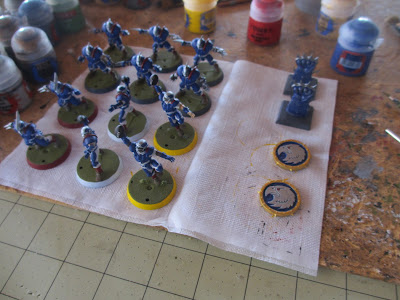 Aside from looking good on the pitch, the painted figs really help with figuring out who is who. We decided to follow the Copenhagen International Tournament Rules Committee's guidelines on base colors to tell apart player's positions. Who are we to question their ancient wisdom? It just works.

The box set comes with a dozen Orc and Human players, and the Skaven starter box has been released. Dwarves and Elves are rumored to be next. Extra players, Star Players, and the like are suppose to be coming from Forge World. Hopefully they will get to the Chaos team before long. 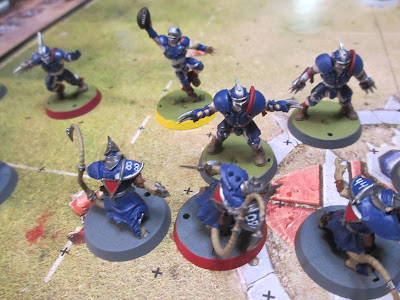 Blood Bowl is a fast, fun and often very chaotic game. It is not for people who can't stand to see their "perfect" strategy evaporate with a few bad die rolls. It is a game where you have to be on your toes and thinking of Plan B at all times. Which is one the reasons I have always really liked this game. BB matches can be exhausting, full of despair and triumph, often in the same turn.

This does feel like it is a real re-launch of Blood Bowl that will have good support from Games Workshop rather than a one-off nostalgia release. I hope that is the case.


Go Roll Some Dice
And Score Some Touchdowns

Posted by Marcus the Blackheart at 6:17 PM 3 comments: