Blood for all my Friends

Time to take the new Chaos Codex out for a little stroll. A timeless match-up of close combat enthusiasts.
Frenzied blood-crazed madmen against the World Eaters.

Matt took a lean and very mean 2,000 points of  "We drink blood, but's that's okay 'cause we work for some dead guy," Blood Angles. I brought a misunderstood group of Khorne followers and some allies from the warp.
We played "The Relic" scenario. Well, not really. After placing the artifact at the center of the table, neither one of us gave it a second thought.
I gave my Berzerkers on bikes a go. Of course now they are not Berzerkers on bikes anymore, just bikers with the mark of Khorne. A important difference that will limit their future use. Turn one had little shooting and mostly just running towards each other. The highlights of the game were:

-Matt's Chaplain-led assault squad wiping out a freshly arrived unit of Bloodletters before they could do anything.
-Kharn killing five Blood Angels and two Berzerkers in one round of close combat, and then hacking up the Death Company Dreadnought.

-My shamefully unpainted Soul Grinder shrugging off repeated lascannon and Krak missile fire to crush a dreadnought.
-The Khorne's Angels biker club wiped out in a turn by a deep striking Vanguard Squad.
-And the Bloodthrister arriving to avenge the loss of the Bloodletters.

The game was close, but the World Eaters came out on top.
Overall it was a good first game for the new Codex, and I look forward to my next victims.

Blood for the Blood God!

Posted by Marcus the Blackheart at 10:36 AM 2 comments:

The Throne of Skulls isn't going to build itself

Khorne. The Skull Lord. My favorite of the ruinous powers. Straightforward and easy to please.
No mindbending schemes, no disturbing (but sexy) multi-boob critters, and no great love of mucus. Just a gleeful slaughter.
All day, every day. Way, way back in the mists of time when I was playing Adeptus Titanicus and was drifting towards 40K I bought a few figures just because the were very cool.

The second Warhammer 40,000 model I bought was some sort of evil space marine, but I loved the look. Later as I played more and discovered more of the universe, I really wanted the make a World Eaters army. Alas, in 1991 this was not strictly possible. It was to be a few more years before GW released a few more World Eaters, and the plastic box of five! All in the same pose however. 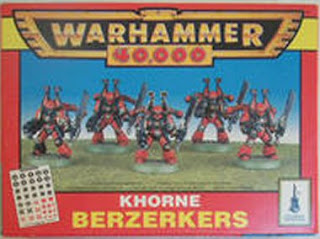 Then of course came the masterpiece that was the 1996 Codex: Chaos. All the Chaos rules in one spot! New figs! A new Berzerker character, my favorite psychotic, Kharn! 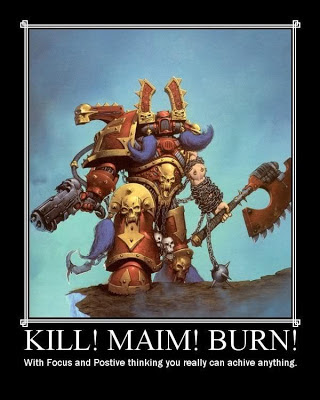 With some Daemons and cultists, I had an eye-lite fighting force. All was well until that mixed bag of a codex, the 1999 3rd edition.
Lost my cultists but gained a multi-pose plastic Berzerker box set.
Soon after (in GW terms at least) came the golden age of Chaos. The 2002 Codex was a worthy successor to the '96 book. I honed my World Eaters to a fine edge, I won a Rogue Trader, and placed very well in a few more with them. Nothing good lasts forever, and six years later a dull, flavorless new codex was dropped on us.
I let my Decapitators Anonymous card expire, and the chainaxes got dusty.

Until now. With a new, better codex it's time to break out the skull polish and update my World Eaters.
The next few posts will be all about that.


Blood for the Blood God!

Posted by Marcus the Blackheart at 12:24 PM No comments:

So this really happened on Wednesday. Maybe Mr. Keane is up for a game?
Posted by Marcus the Blackheart at 10:45 AM 2 comments: