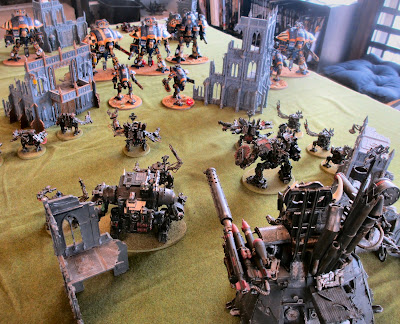 What is the best way to celebrate Labor Day? 150 Power Level kill-fest with giant robots of course! 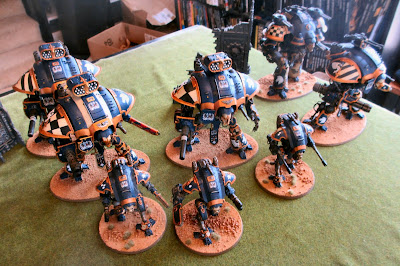 I just finished up a Knight Castellan and three Armigers, but I had to go back and do some touch ups on my four previous Knights so they would match up. Which entailed re-doing all the gold trim and rebasing them. Yeah, I know I'm a bit crazy. But now they look like a unified force. 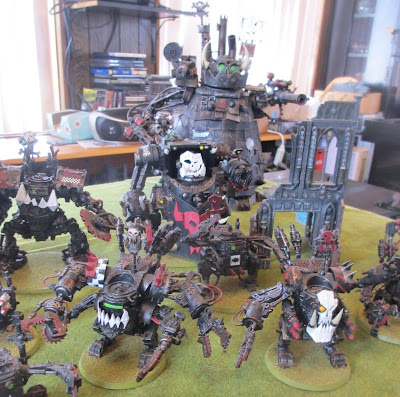 The Ork force was led by a Stompa (with the Gaze of Gork) a Gorkanaut, a Mega-Dread, and a host of Dreads and Kans.

Both sides charged straight at each other, firing all the way. The Knights shooting was overwhelming, and was able to thin out the Mob before it closed to melee. The close combat was as fast and brutal as you may think. The Stompa took out a undamaged Paladin with it's Mega-choppa (24 points of damage!) before the Knight Baron fished the Stompa off with a spectacular 20 point hit from his Thermal Cannon. The Knights took a lot of damage, but only lost one Knight and all three Armigers. 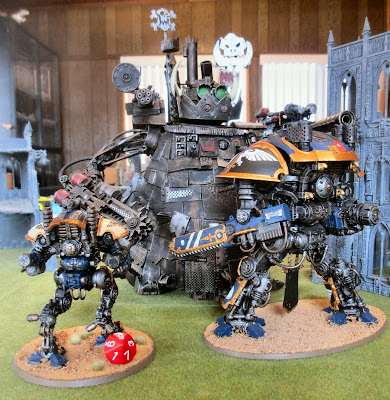 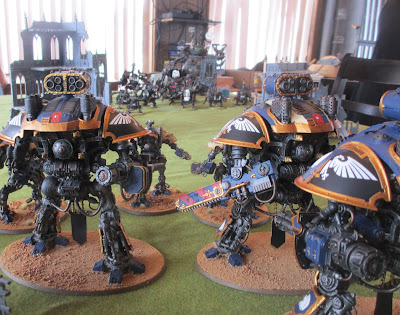 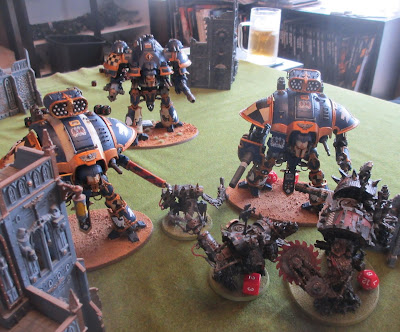 It was a good game, but I do feel the Knights might be under-pointed. More likely, the Orks (who don't have a real Codex yet) are too expensive. Of course the lower end units, the Kans and Dreads probably knocked the Ork side a bit out of whack.

I would like to run this battle again and give the Orks a 51 PL handicap, which happens to be the price of a second Kustom Stompa...

The Emperor Protects
But Charge the Ion Shields Just in Case

Posted by Marcus the Blackheart at 12:07 PM No comments: 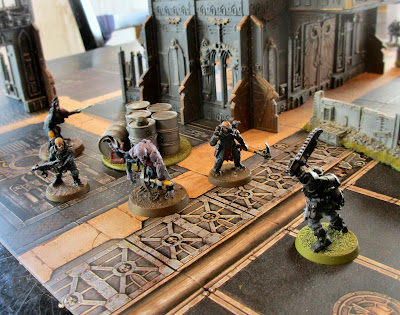 Kill Team has been out for a bit now and it seems to be really taking off. I have only managed to get in a few games but I like it a lot. It's quick and fun. The command point and specialist abilities give it a good edge without making it super fiddly. (unlike what X-Wing became...I'll talk about that soon.)

I would like to see some more units made available, particularly for the Eldar. I understand that the current units are tailored for Match Play, but that is so not my group's focus. Which brings me close to my main idea here: 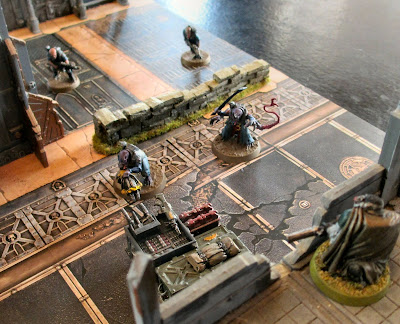 Kill Team is a fantastic vehicle for narrative play. The small scale and advancement of characters make it perfect for a lite-RPG-wargame experience. Yes, my concept takes it from the 1 vs 1 type of play to a kinda GM vs player thing, like Imperial Assault and others like it. Where the GM creates a set of liked scenarios that the player will bring their Kill Team through escalating actions to a climax.

I have a test campaign just about ready to go, and will unleash it in a week or so. If it goes well, I have a much longer campaign in mind, with some custom characters on both sides.

*                     *                 *
In the time it has taken me to finally get back to finishing this post, Games Workshop has given more details on Rogue Trader Kill Team. To my surprise, it is exactly what I hoped it would be: a focused narrative campaign, with nifty custom characters on both sides. I am very excited for it and will give a review of the boxed set next week.

Go Roll Some Dice
Roll To See If I'm Wining

Posted by Marcus the Blackheart at 5:04 PM No comments: