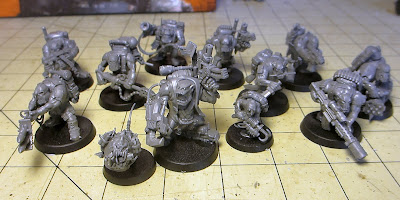 I built the Ork side of the new Kill Team set, and damn, they are very cool. I made every one of the specialists and two "normal" Kommando Boyz. Lots of good bitz left over to customize even further.

They are of the not-quite-interchangeable parts school of sculpting. Everybody has a good pose, but only a few variants within that pose. Some parts do fit on other poses just fine, some need encouraging.

My only gripe with the build was the instructions got real vague for the last two Boyz, and a few parts seemed like they should go somewhere, but I couldn't find them listed anywhere in the instructions. Nothing showstopping, just a minor annoyance. 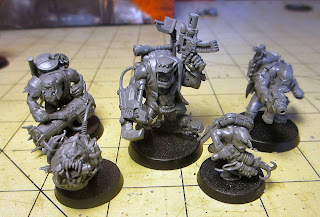 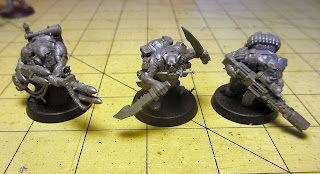 They should be  lot of fun on the table. I'll get to the Death Korps Veteran figs in the next few days.

Sneaky and Shooty and Stabby
Just as Gork Intended
Posted by Marcus the Blackheart at 2:03 PM No comments: 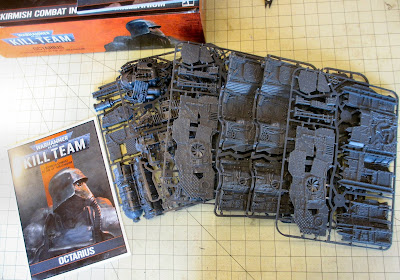 I got the New Kill Team box set yesterday. I'm going to read all the rules and have a few battles before I make my verdict on this new version. Today, let's look at the fancy new Ork terrain.
What is this new stuff? Well, it is the very nice rubble and barricade frame from Speed Freeks, an Orky Oil derrick (or brewery) and two sets of the two Ork compound frames. I assembled the terrain, and it looks like this:

The buildings are all very well detailed and suability Orky. You get two planks to make nice little walkways between buildings. Oddly, it doesn't tout the cool fact the terrain set can also do this: 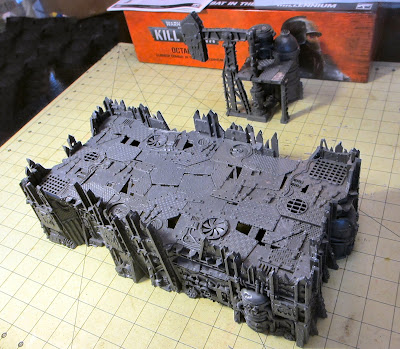 That's right! The chunks are cut in such a way that they will snuggle up to each other, and two floating pieces that fill in the gaps. This makes the terrain much more flexible to set-up. 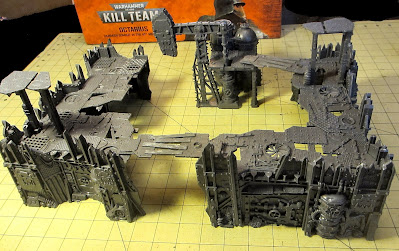 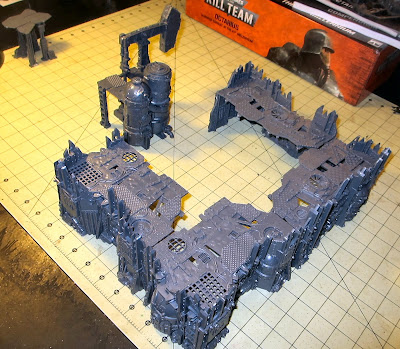 I will get some paint on it, and get to (New) Kill Teamin'.
An Ork Hangout At Last
And a Craft Squig Ale Brewery

Posted by Marcus the Blackheart at 10:02 AM No comments:

Mrs. Blackheart got a fancy resin 3D printer. A Elegoo Saturn. It's really amazing, I will be showing it off a lot. The learning curve on it is not too bad. Tons of great tutorial videos on the YouTube.
No one really needs a dice tower, but they are fun, and after seeing this one, I really want to give it a try. We have a small collection growing. The best one is a 20 pound beast made out of steel. I'll have to do a post on all the dice towers here at HQ.
This was a project to see if we had gotten most of the mistakes out of the way. Short answer was no...we still needed a bit more practice on generating supports for the print. Second try on the staircase went much, much better.
The hardest part of the project was finding the correct sized plastic bottle.
Go Try Something New
Robots are Fun. Mostly.

Posted by Marcus the Blackheart at 1:24 PM No comments: 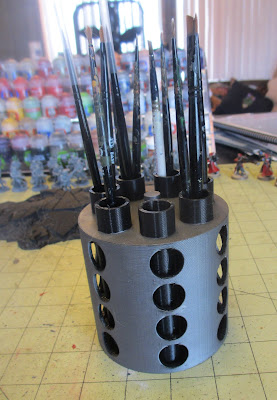 *Well, the holder isn't hight-tech, but the way it was made sure is. It is a 3D print from Mrs. Blackheart's Pursa FDM printer.

For the sharp-eye folk out there, yes, it is a half scale replica of the business end of a Avenger GAU-8 30mm gatling gun. The one on the A-10 Warthog. 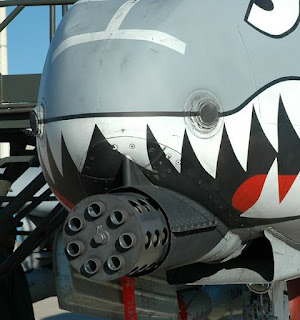 I first it saw it on the Internets, somebody had printed it out as a quarter scale display piece. I though, "We should make it twice as big and use it as a brush holder!" As one does.  It was a bit of a hunt to find the STL file so we could rescale it and print one for my very own.

The muzzle prints as one piece, no supports. Took nine hours, but the Prusa servitor did just fine by itself.

It was printed in black filament, but I wanted a bit of contrast to it. I found a picture of a GAU-8 sexed-up a bit for an airshow, so I went with that color scheme, not quite as shiny though. 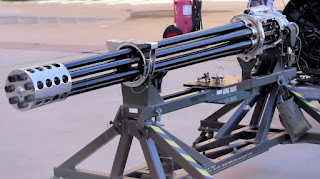 After a bit of creative masking, a quick couple of passes with some Titanium spray paint, it looked great! 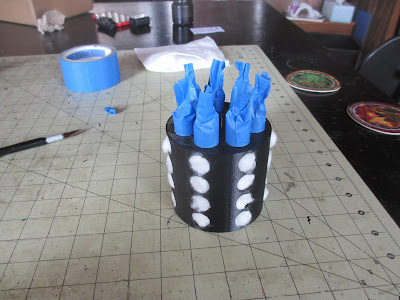 Those are cotton balls stuffed inside the vent holes. 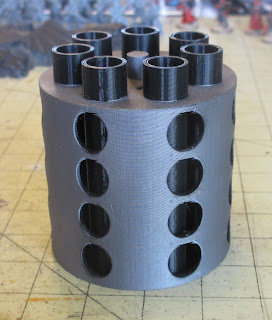 Not only a novelty piece, but it does function quite well as a brush holder.
Attack Your Stack
Brush Holder Go BRRRRRRT

Posted by Marcus the Blackheart at 1:03 PM No comments: