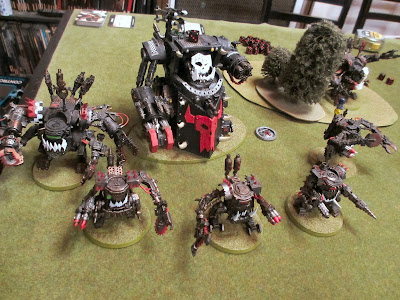 Time for an old fashioned BattRep. I brought 3K of Orky Dread Mob fun. A Stompa, MegaDread, Gorkanaut, four Dreads, and six Kans, backed up by a bunch of boyz in trukks with some air cover to boot. 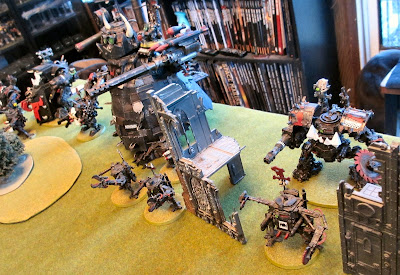 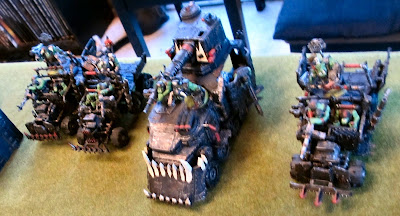 On the other side of the table was a bunch of jerks all in red: Blood Angels and Eldar. They also brought a bunch of walker types. Matt's Blood Angels bringing five dreadnoughts of all flavors, and Mrs. Blackheart had two Wraithlord, and a Wraithknight. Of course they took non-walkers as well.  It wasn't a boing battle. 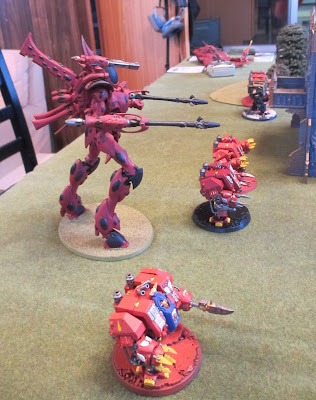 It was one of those classic "I'm totally winning!" for the first two turns kinda games. Both sides dice where a bit on the cold side, but I was doing far more damage than I was taking, and raking in the victory points via tactical objectives. My Stompa had only taken one damage point. It looked like this would be a swift game. 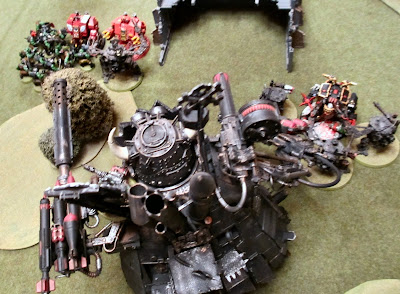 Then three happened. My dice took a nap. I drew terrible objectives. Missed two charges. Spilled my drink.
The Eldar-Marine Alliance had no such issues. The Wraithknight dropped my Stompa with some fantastic shooting. The Gorkanaut and Megadread also blew up this turn. I thought I could still rally and pull this out. 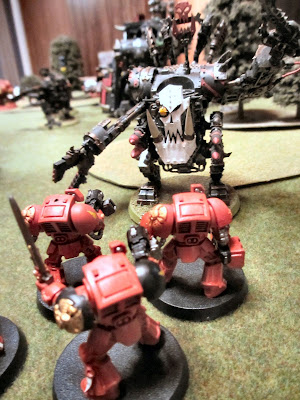 I did alright. Killed off a Terminator squad and a Wraithlord. The Elar and marines quickly put an end to thoughts of victory by wiping everyone but my tankbustas off the table. 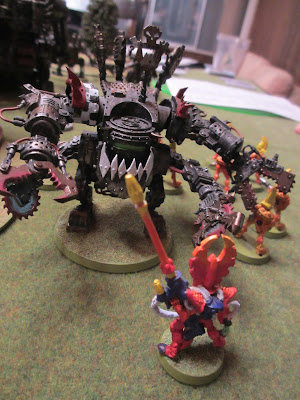 Phoenix Lords. Very good at breaking things. We called it at the end of turn five. Orks 8, Eldar/Blood Angels 12. A fun game with some unique army lists.

Next up: Time to talk about turn structure.


Stomp Them All!
Wait, where did they get so many Fusion Guns?
Posted by Marcus the Blackheart at 10:53 AM No comments: 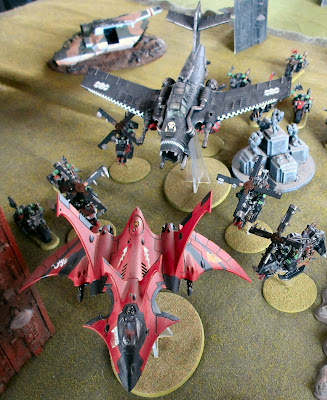 Grilled food, rum, and plastic warplanes battling it out on the tabletop. What better way to spend Memorial day? (The beach was totally overcast) None better! Here is how our version of Wacky Air Combat Racers went. 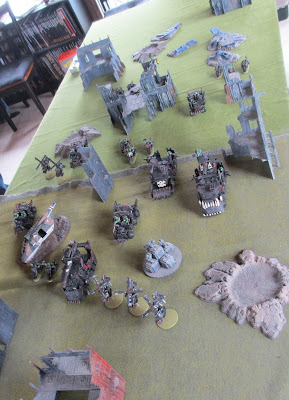 Three flyers set up side by side at the far end of a twelve foot table. The Ork convoy is about seven feet from them. The Ork Battlewagons and trukks must drive 12" every turn towards the edge of the table and safety. All the escorting Ladz must turn and attack the marauding aircraft. On turn two a pair of Ork fighters show up.

The attacking flyers may not attack each other. Mission is over after five turns or all the attackers are shot down. Points are scored for kills. Highest points wins. 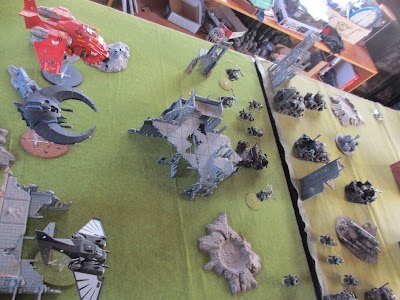 First mission saw Blood Angels, Necron, and Dark Angels take to the skies. I did well with my fancy new Nephilim Fighter, right up to the point when I got blown out of the sky by a volley rockets fired by a squad of Dethkoptas. Pete's Necron Crensent 'o Doom zapped many Orks but was brought down by the Black Baron. The Blood Angel Stromraven, flown by Matt, tore up the greenskins with its huge array of weapons until it too was felled by some very hot dice. 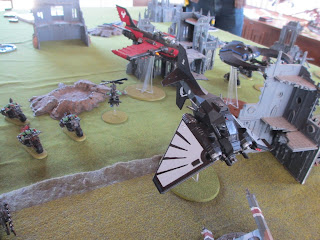 The second mission had the defending champion, Mrs. Blackheart with her Eldar Death machine, Jeff taking a Valkyrie Vendetta, and Colleen using a Khorne Heldrake. 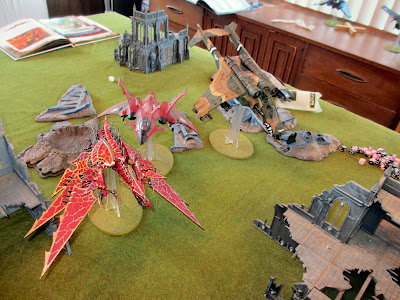 The Heldrake was very effective with the vector assault and Hades autocannon. A mob of Ork bikers finally brought the rampaging mecha-beast down. The Valkyrie and the Crimson hunter had outstanding runs, laying waste to the convoy. The Eldar fighter was shot down by the dreaded Black Baron, who in turn was smoked by the Valkyrie. Turn five ended and the Imperial gunship was the last one airborne. 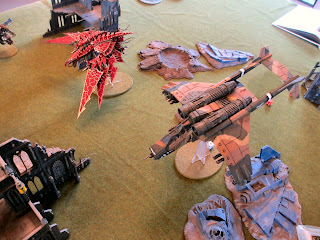 After the totaling of the points, Jeff with the Valkyrie squeaked out a win over the Eldar! The Blood Angels rounded off the podium with a close third place. 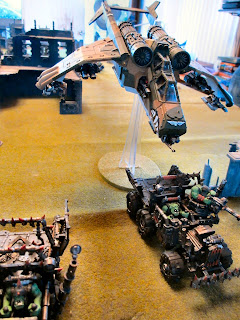 A very enjoyable and fast moving event. Next time I'm just going to bring my Thunderhawk...


The Emperor Protects
He obviously had money riding on it

Posted by Marcus the Blackheart at 10:14 AM No comments: