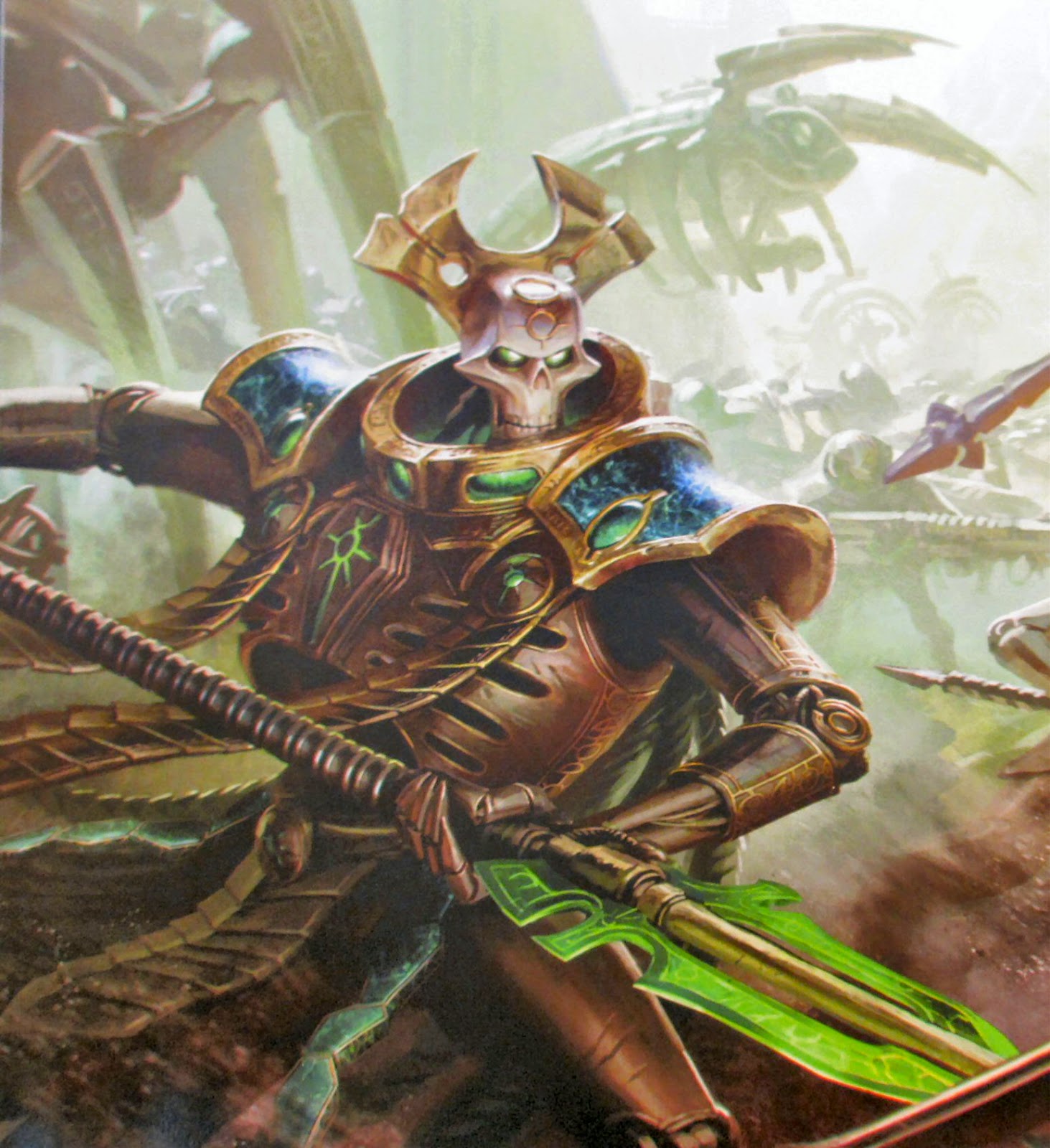 I have always liked the necrons. It's like someone took Iron Maiden's  Powerslave album cover and mixed it with The Terminator, but in Space! This is were the quest for the most epic '80's-'90's evil sci-fi villains wound up. And I am still totally good with it. I think the Necrons have come the farthest in development of any of the 40K races, given their meager beginnings in White Dwarf #217 (1997) as the Necron Raiders. I really enjoyed the last Codex, when they gave the Necrons some personality and a better backstory, making them much more fun and fleshed out as a race.

I have taken a fast run through the new Codex and here is what I have found:

Standard high level production of the book. Great art and lots of pretty pictures of models. Seems like there is a little less fluff, but I have not read through it yet, so I'm not sure. 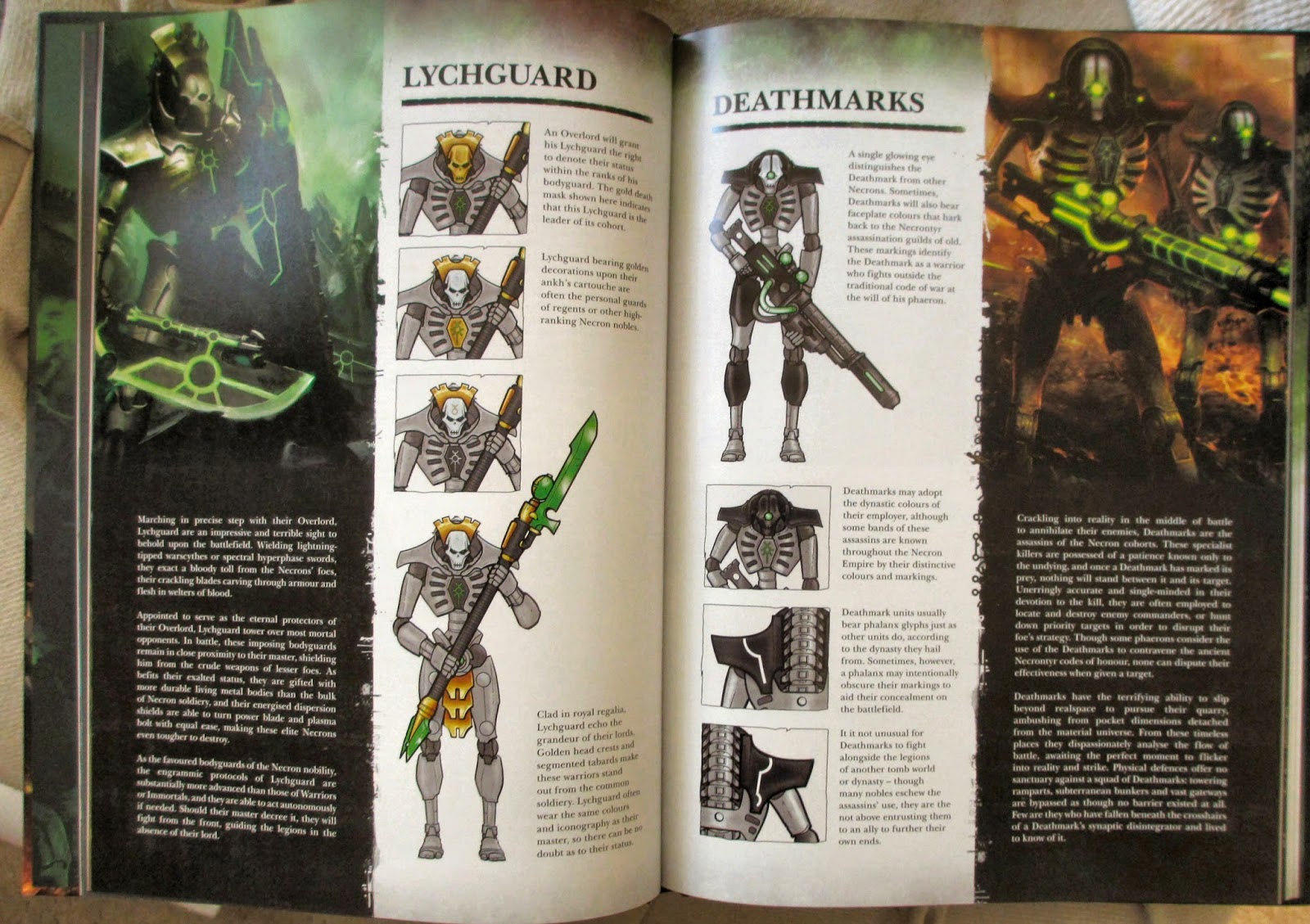 Reanimation Protocols: Yep, now it works just like Feel No Pain with a few improvements against Instant Death stuff. I'm not sure how I feel about the change. On one hand it will make things move much faster, but it does take away that moment when a bunch of the models who just died get back up. Gameplay wise, I think it will work more in favor of the Necron player. We will see.

I like all the Warlord traits. Living metal got better as did the Doomsday Cannon by a little bit.

Entropic Strike is now just like Gauss Weapons but for hand to hand attacks. yes it does lose some flavor but much easier to keep track of during the game.

A lot of units got cheaper. the Praetorians and Lychguard by a substantial amount. Only the Wraiths, Scarbs, and Night Scythes went up in cost.

Crypteks work a bit differently now. Alone they are a HQ choice. There are a few ways to take several in Formations and the new and very different Necron Detachment system. The Crypteks are no longer restricted in the wargear they can take, they have full access to the Technoarcana and Artefacts of the Aeons lists. And any unit with a Cryptek attached gets a +1 to Reanimation Protocols, so very useful guys.

The C'tan have four entries. Nightbringer and the Deceiver are unique elite choices. The Transcendent C'tan replaces the older C'tan Shard and is now a heavy. The Tesseract Vault joins the Codex in a Lord of War slot. There are six C'tans powers are now, and they are all in the form of shooting attacks. The Powers are rolled randomly before each shot and they are all pretty powerful, some more than others. Each power has two stat-lines, one for Transcendent and one for Coalescent. The Coalescent profile is use only for the Tesseract Vault and has double range and more shots or  bigger blast, depending on the weapon.

I have saved the worst for last. All the rumor guys were right. This Codex is lame because they have completely nerfed... the Tachyon Arrow! Sure it is still Strength 10, AP1, but the range have been reduced by, um, I'm not sure how to subtract anything from infinity, but it must be a huge number.
Now the range is now only 120"! How am supposed to I shoot people across the solar system?

It is nice to see the Necrons brought up the 7th edition standards. I have not seen anything that is terrible, maybe a little too much streamlining in places but it is a solid Codex. Time to raise my own undead-ish robot army!


They Are Legion
And make Awesome Metal Album covers

Posted by Marcus the Blackheart at 3:07 PM 2 comments: 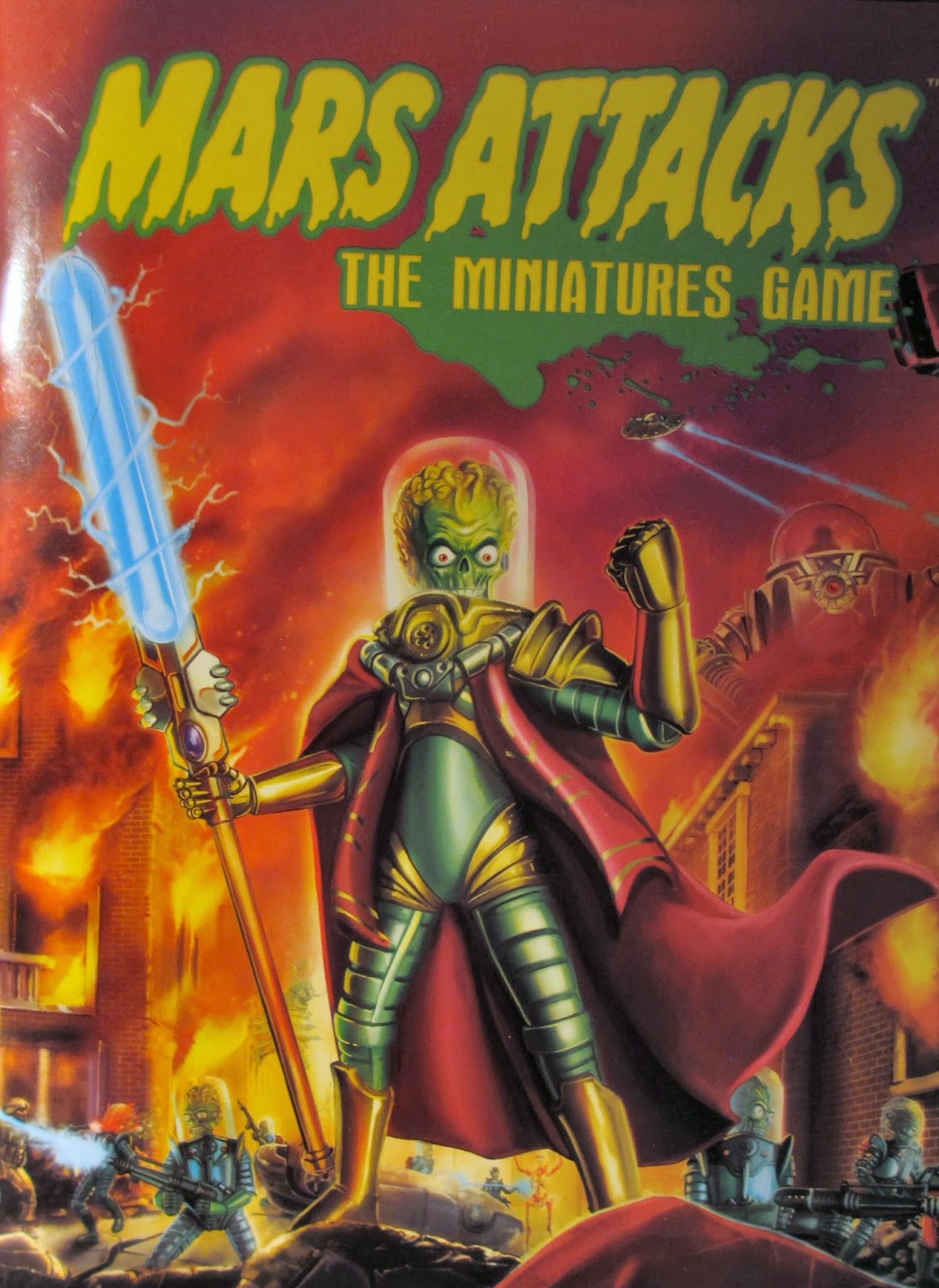 In the campy near future there is only war. Mars Attacks: The miniatures game is made by the other miniatures company in Nottingham, Mantic Games. The second of two big Mars-themed minis game to get funded on Kickstarter (All Quiet on the Martian Front being the other) it promised a fun and fast playing skirmish game. So how does it do? 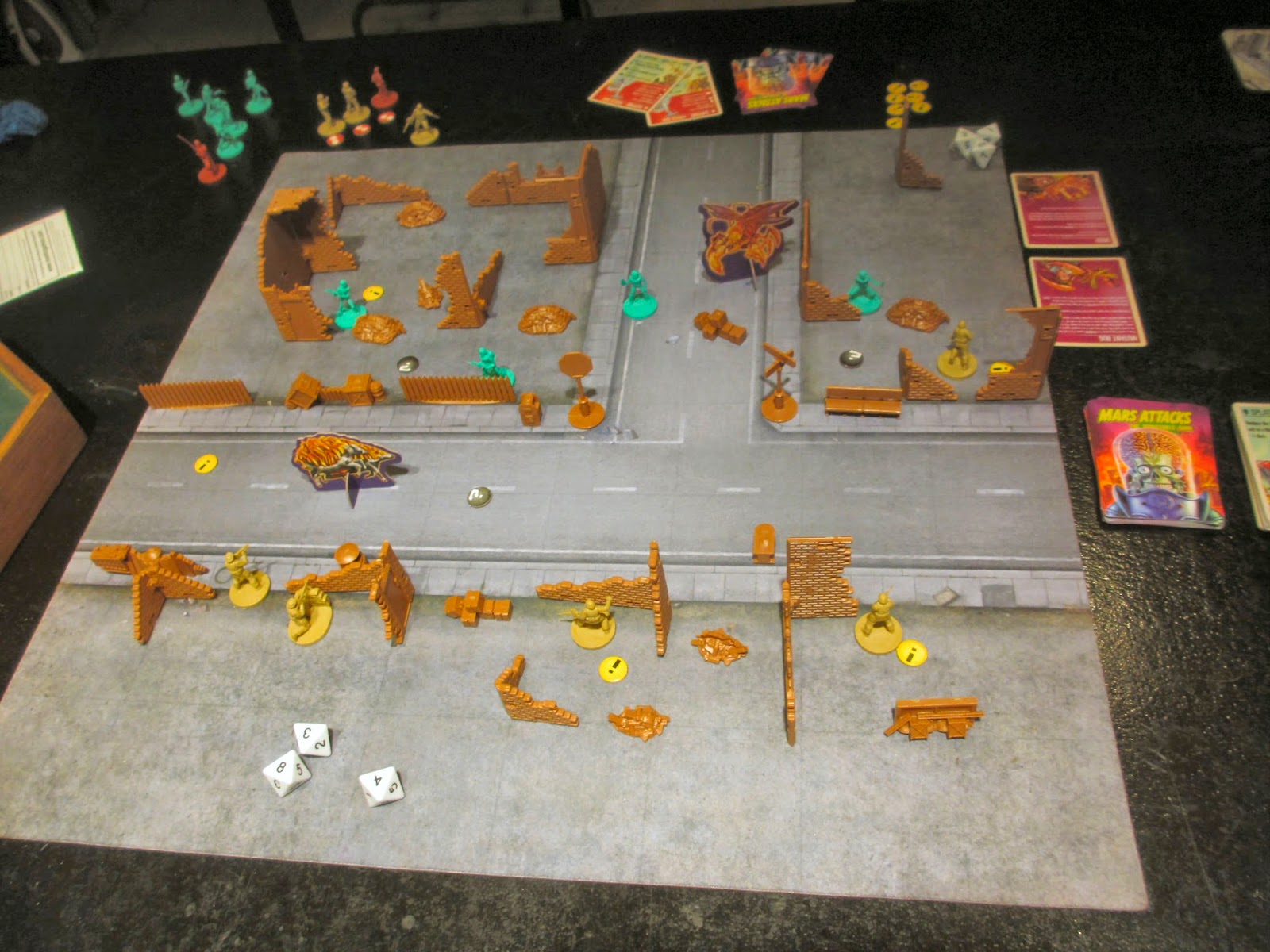 Short answer? Very well. The base game (which can be had for $61.00 on Amazon) comes with a bunch (40) of nice looking figures. The Martians have clear helmets that need to be put on them, but all the rest are one piece molds and are ready to play out of the box. Cardboard stand ups are provided for five civilians, a giant bug, and the flaming cattle. We'll get back to that last part in a bit.

You get a fair amount of nifty ruined brick building modular scenery and a smattering of urban accessories. Also included is a well illustrated 44 page rulebook, the game map, a deck of action cards, game counters, and a handful of eight sided dice.
The game is played on a 8x8 square grid depicting the center of small town, USA. Being grid-based it removes all the fiddly bits of using a ruler for movement and weapons range. The ten scenarios in the book follow the story of the Martians attack on Greenville and ramp up in scale and complexity. Not that this game ever gets very complex. Which is one of the reasons I really like it.

Gameplay. Oh yes, the real reason we are here. Theme and nice components are fine but can only carry a product so far, especially a licensed one. Play is smooth and fast. On a Player's turn she may
activate up to two individual models and/or play a action card. This alternates between players until all models have been activated. Then both players draw new actions cards and the next round begins. Victory conditions are generally achieved by reaching 8 Victory Points first. VPs can be gained in a number of ways depending on the mission, such as killing units, finding items, and holding positions. 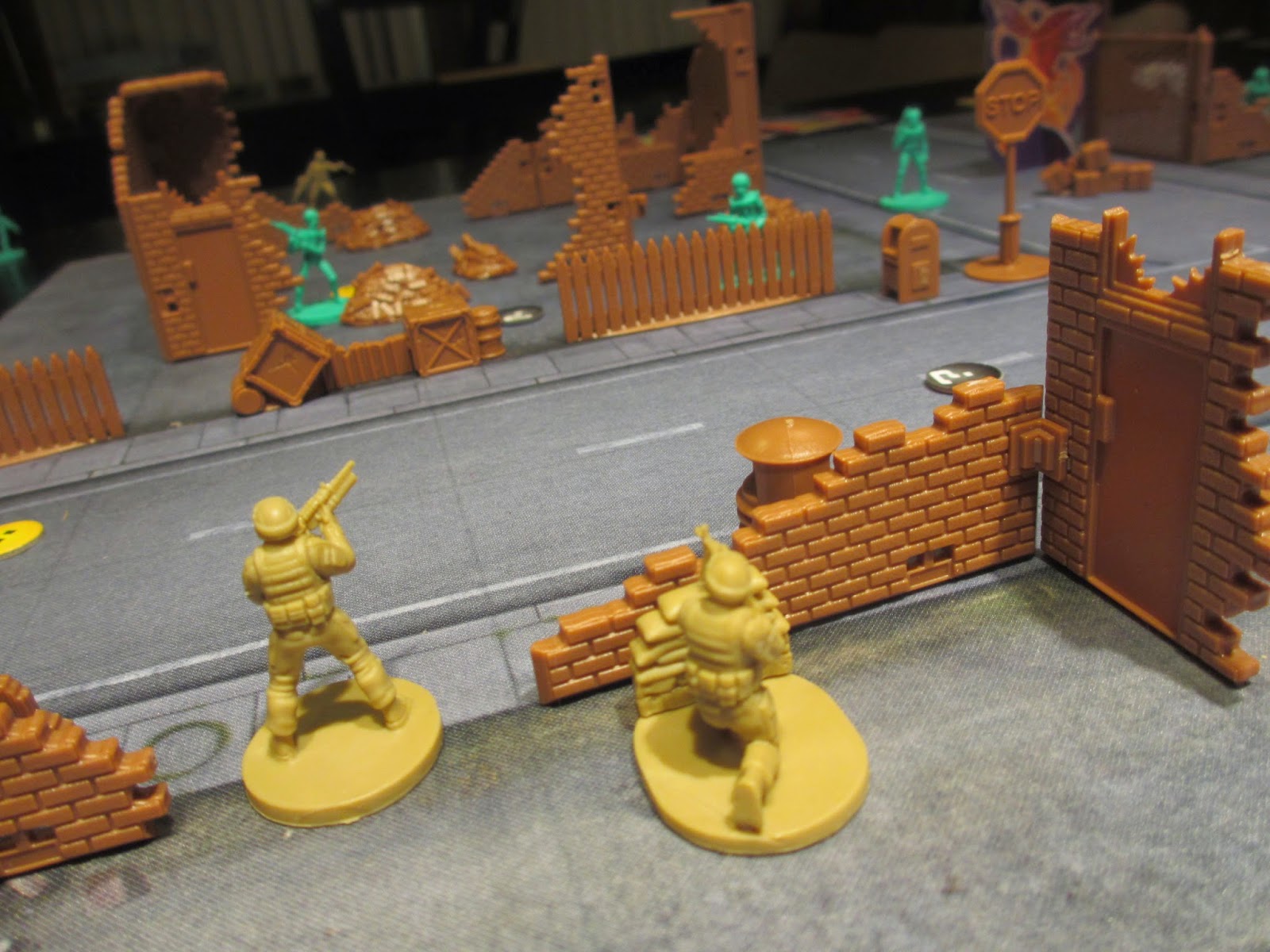 Combat is resolved quickly via an opposed dice rolls for both ranged and close combat. The heroes are the meat of the missions and are varied and interesting, with some good skills and abilities.

The action cards add that something "extra" to the game. The cards may help an attack, be powerful off board attacks or a random event. The events are fun: civilians popping up and wandering around the battle zone, stray artillery strikes, a giant mutant bug, or a herd of flaming cattle running across the map.

I recommend this game. It is low-complexity, fun, and fast playing. Mantic has a number of expansions coming soon, so replay value looks to be high. Now I just have to find the time to paint up the minis... 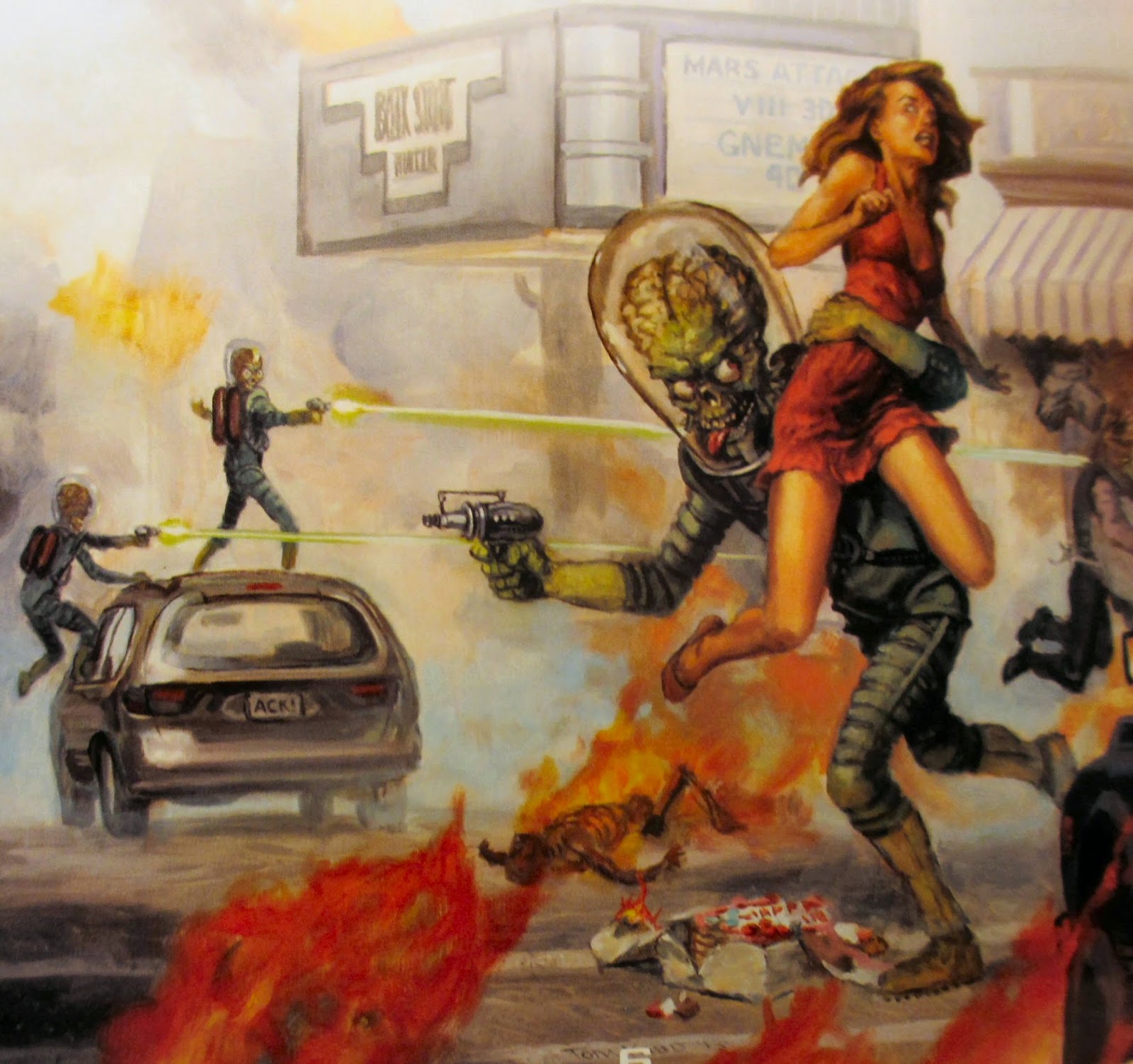 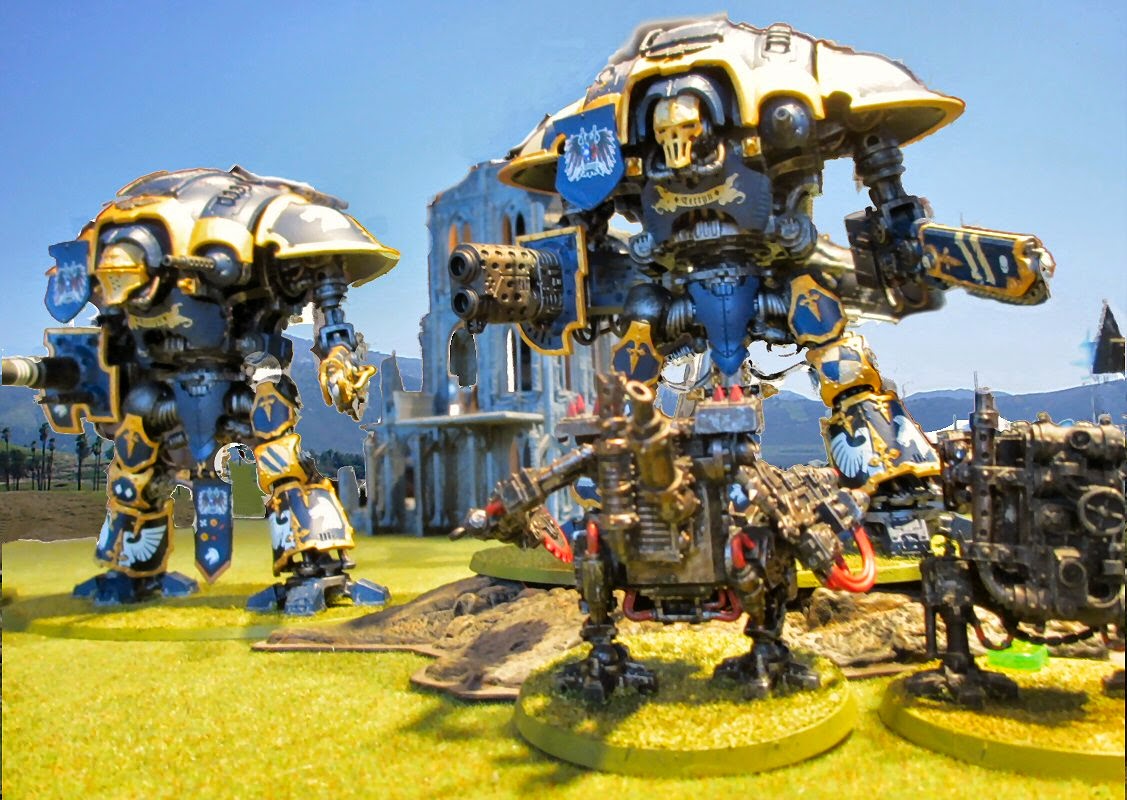 Sanctus Reach mission 2, the Knights headlong charge into the Ork hordes. I am usually loath to use stand-ins for a real game, this time I had no choice. The Imperial side wanted just Knights, to properly represent the "historical" setup. That is five Knight for a 2K game, I only own three. So we used a Tau Riptide and a Eldar Wraithknight at the start of the game and subbed them out for proper Knight models as we took losses.

The Imperial forces must exit the board and half the Orks start in reserve. Sounds like a cakewalk for the Knights. It's not. All Ork reserves have Outflank and the Knights are going the long way down the table. Mrs. Blackheart started all her Dreads and Kans on the field. As awesome as Knights are, they can be overwhelmed. We lost a Knight for three dreads and two Kans. Then a mob of Tankbustaz arrived right behind the Knight Errant on our left flank. It only took a single point of damage from 15 rokkits, but only killed off three orks in hand to hand. 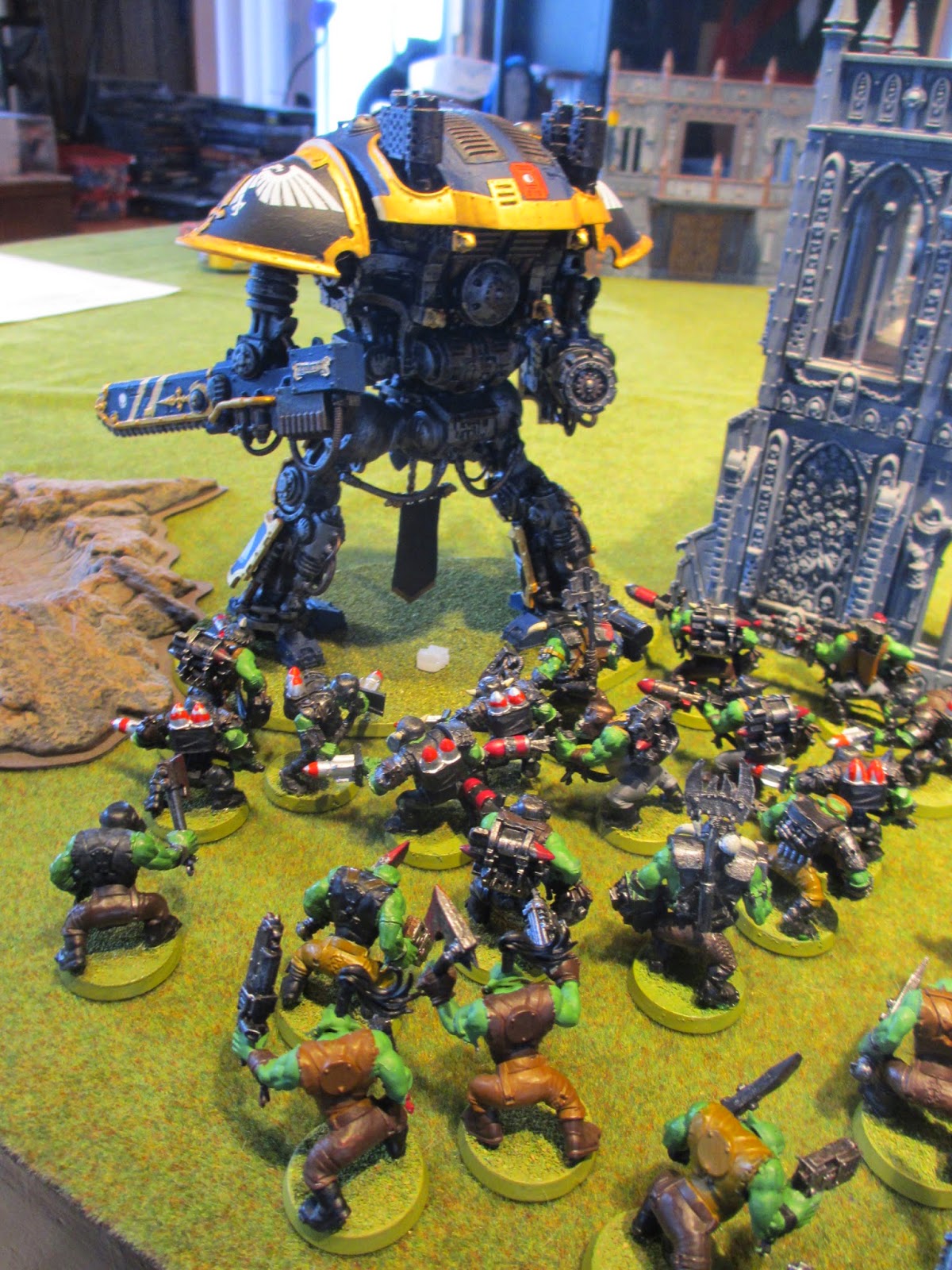 The remaining dozen orks with tankbusta bombz did the trick. Of course only two tankbusta boyz survived the resulting explosion. 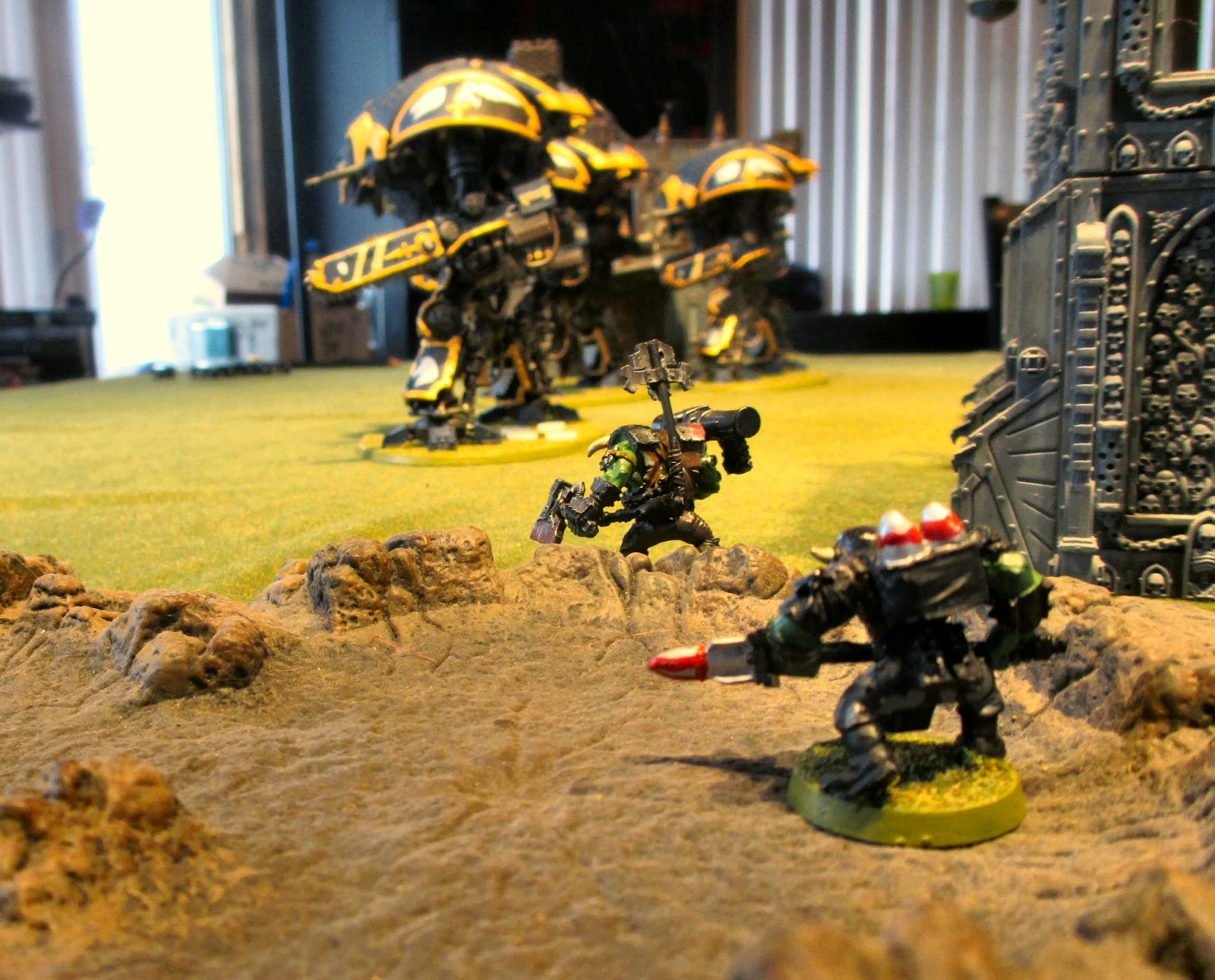 More ladz arrived but were mown down before they could do enough damage. The three remaining Knights survived, (one had only a single hull point left) and squeaked out a victory, 5-4. 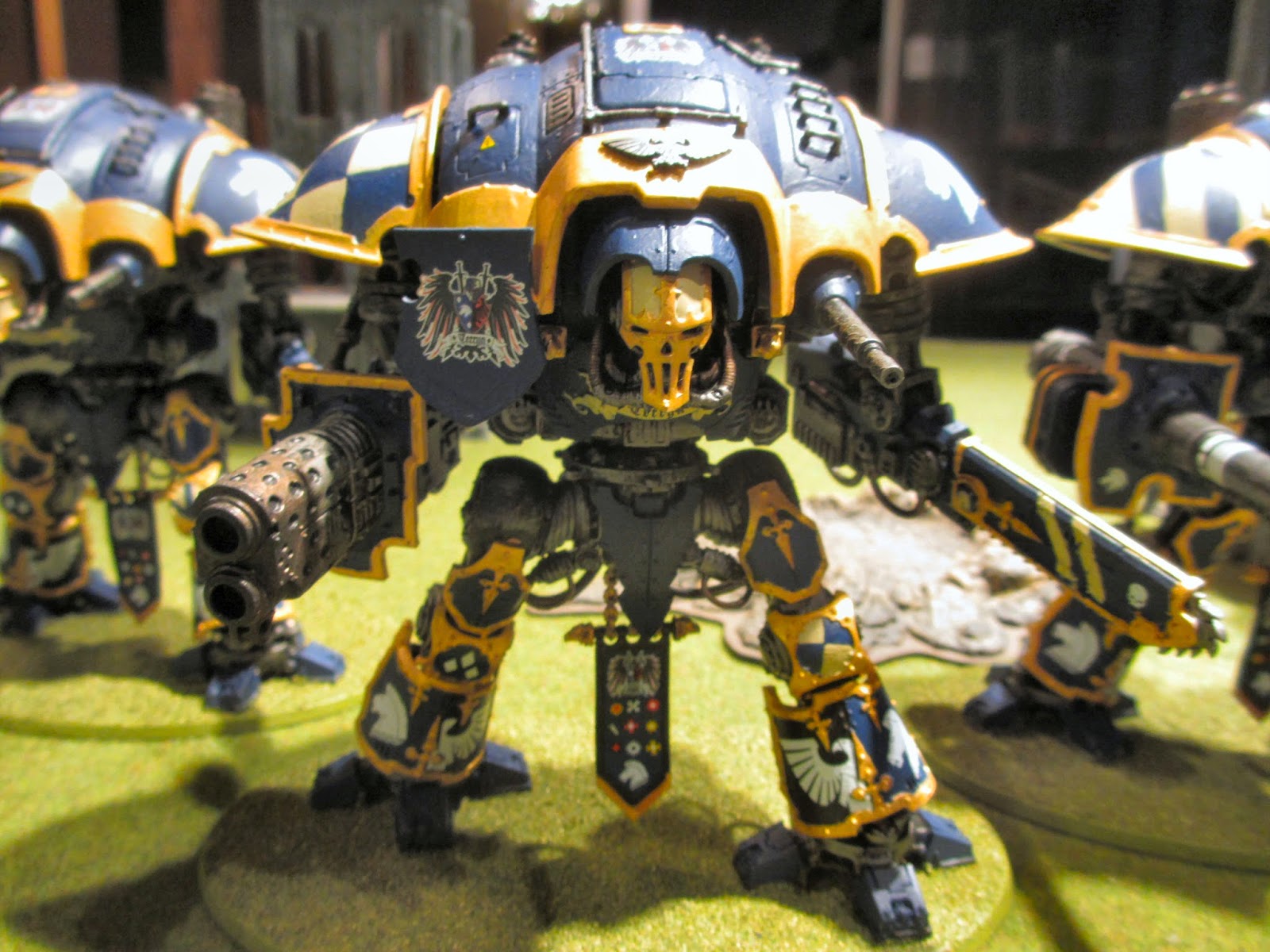 A good, close game. I am having a lot of fun with the Knights, they are powerful, but far from invincible, and look great on the table. Well worth the work I out into them.
Two weeks until the next battle report. In the meantime I will review Mars Attacks and Star Wars: Imperial Assault next week.

For the Emperor!
Orks:1, Imperials:1

Posted by Marcus the Blackheart at 4:41 PM 2 comments: 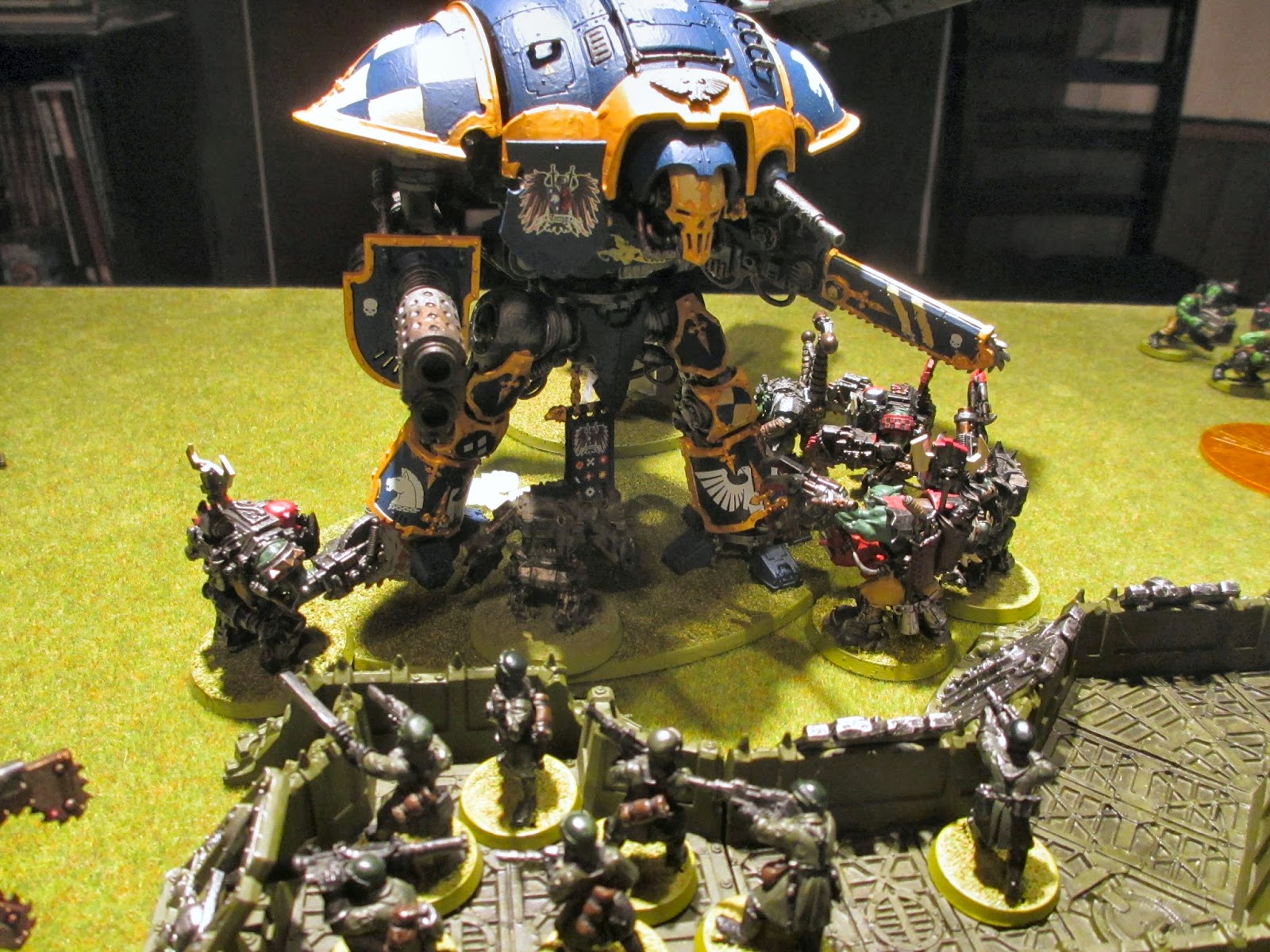 And we are (finally) underway! The two supplement books that make up the Sanctus Reach Campaign tell a good story of an Ork invasion of a Imperial Knight World. The missions are varied and a have good flow to them, each one a highlight of the "historical" war.

Mission 1 is The Red Waaagh! Descends. The Orks making planetfall against Imperial defenders using the revised Planetstrike rules. I took two platoons of Guardsmen with heavy weapon sections in support to start in the fortifications. A pair of Leman Russ tanks and three Sentinels were my reserve force. Matt, the Knight commander had a Paladin and a Errant, also starting in reserve to avoid the first turn bombardment. 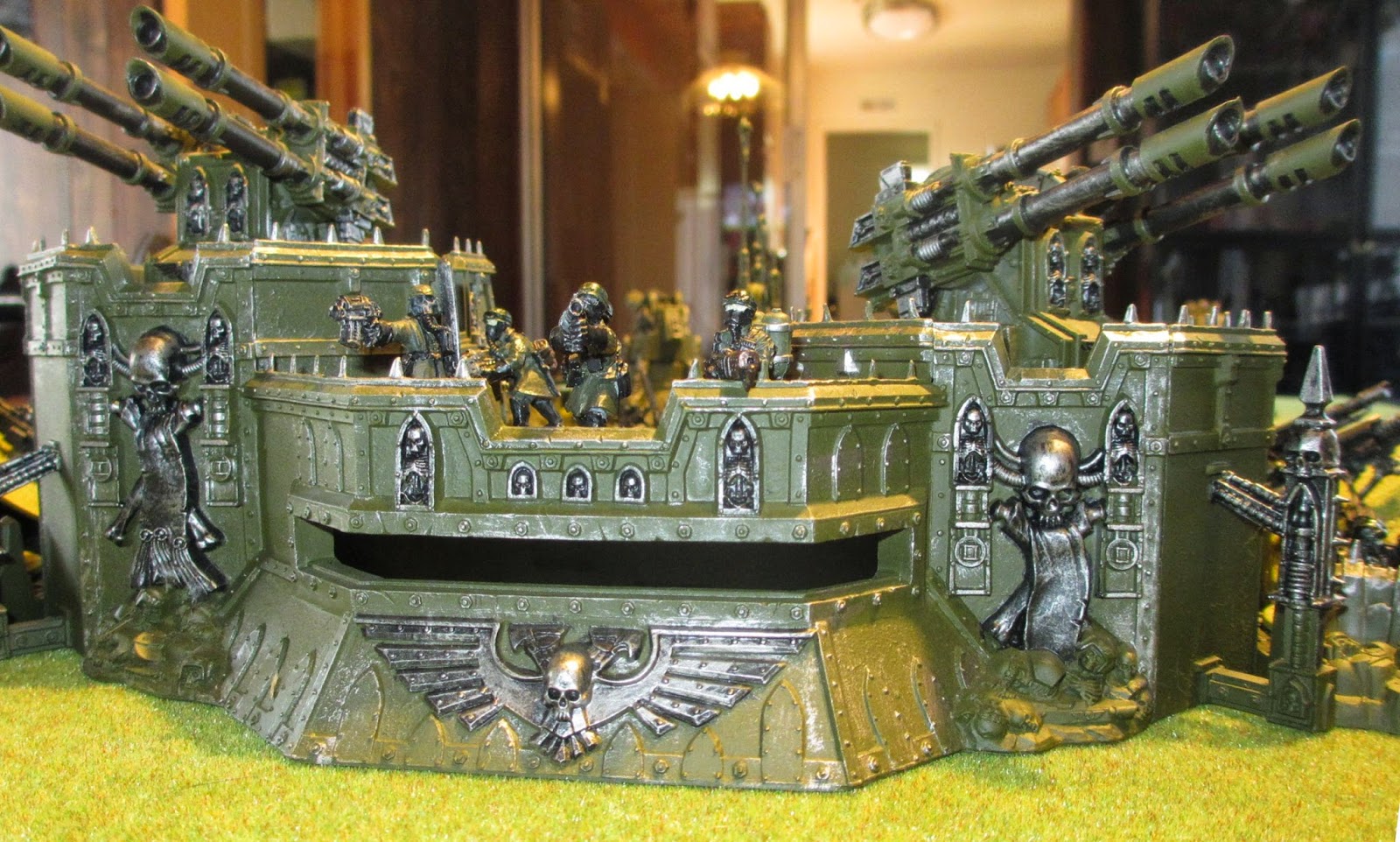 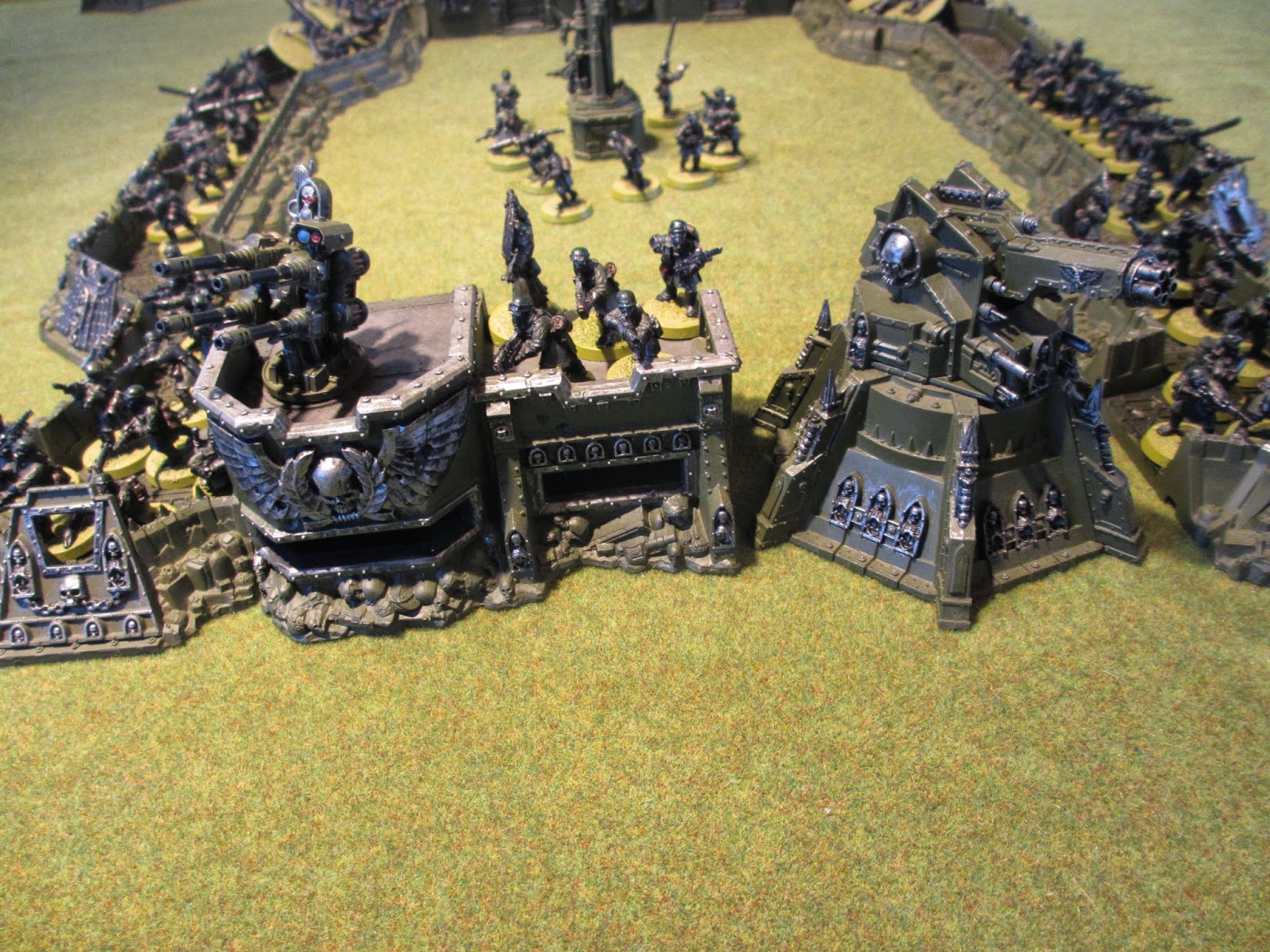 Mrs. Blackheart started the Firestorm bombardment and did a lot of damage to the defenders, notably most of my anti-aircraft assets and heavy weapon squads. Then the ladz came from the sky, and using the Heavy Duty Drop Stratagem, two Deff Dreds and a unit of three Killa Kanz came with them. 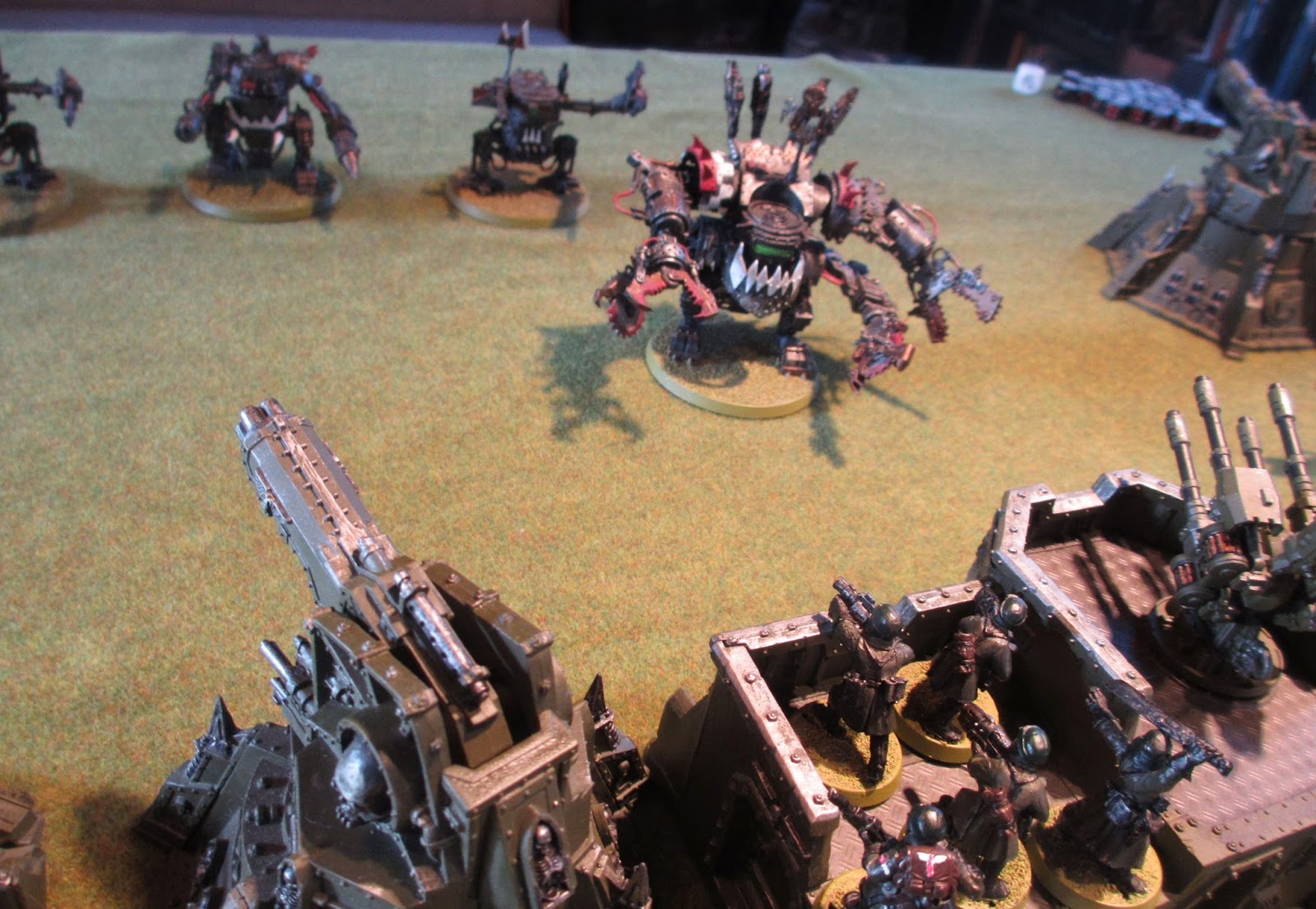 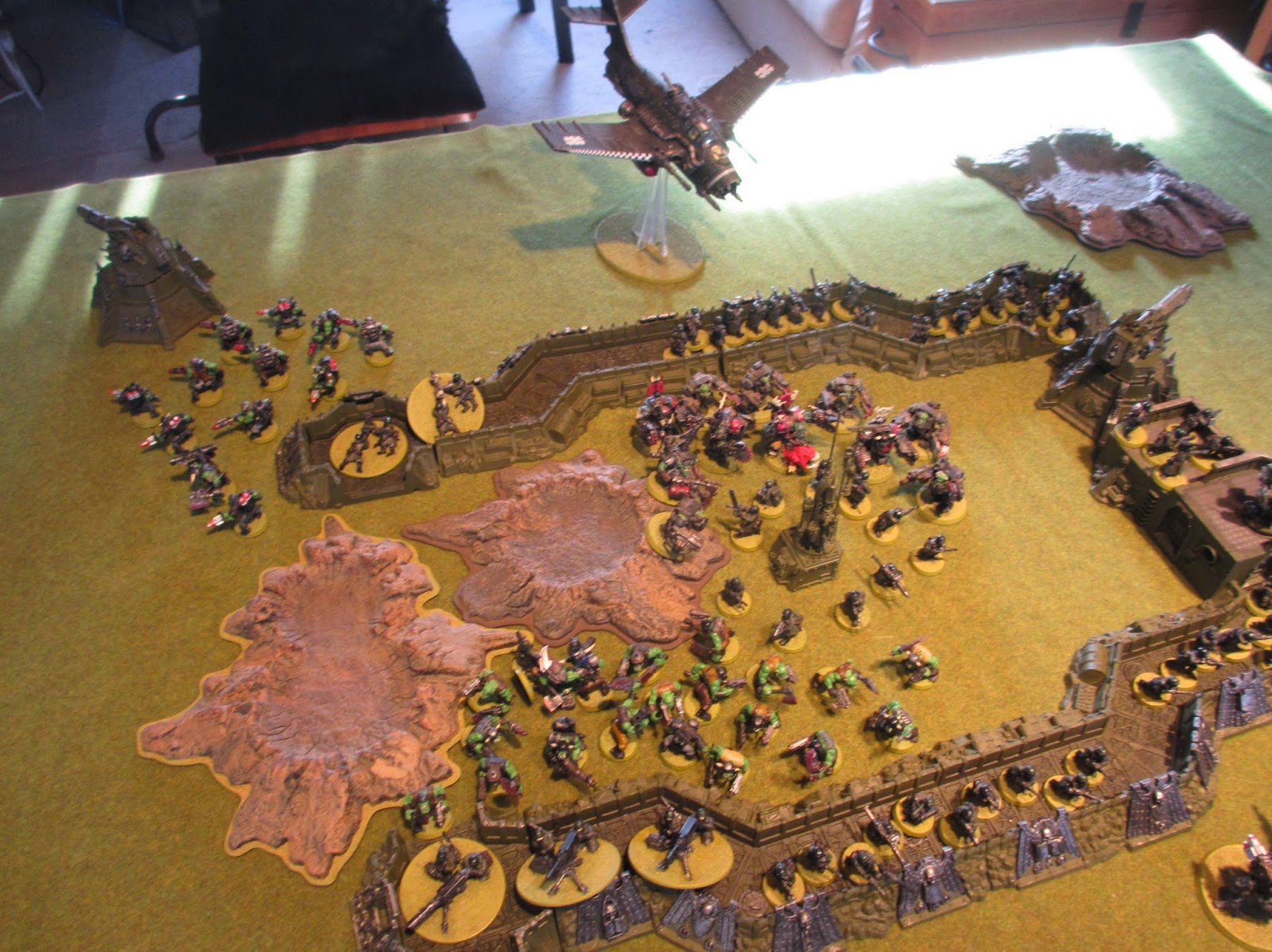 She chose suicidally dangerous drop sites. To our dismay, they paid off and Facerippa with his meganobz, plus a unit of Boyz landed inside the walls of the firebase. 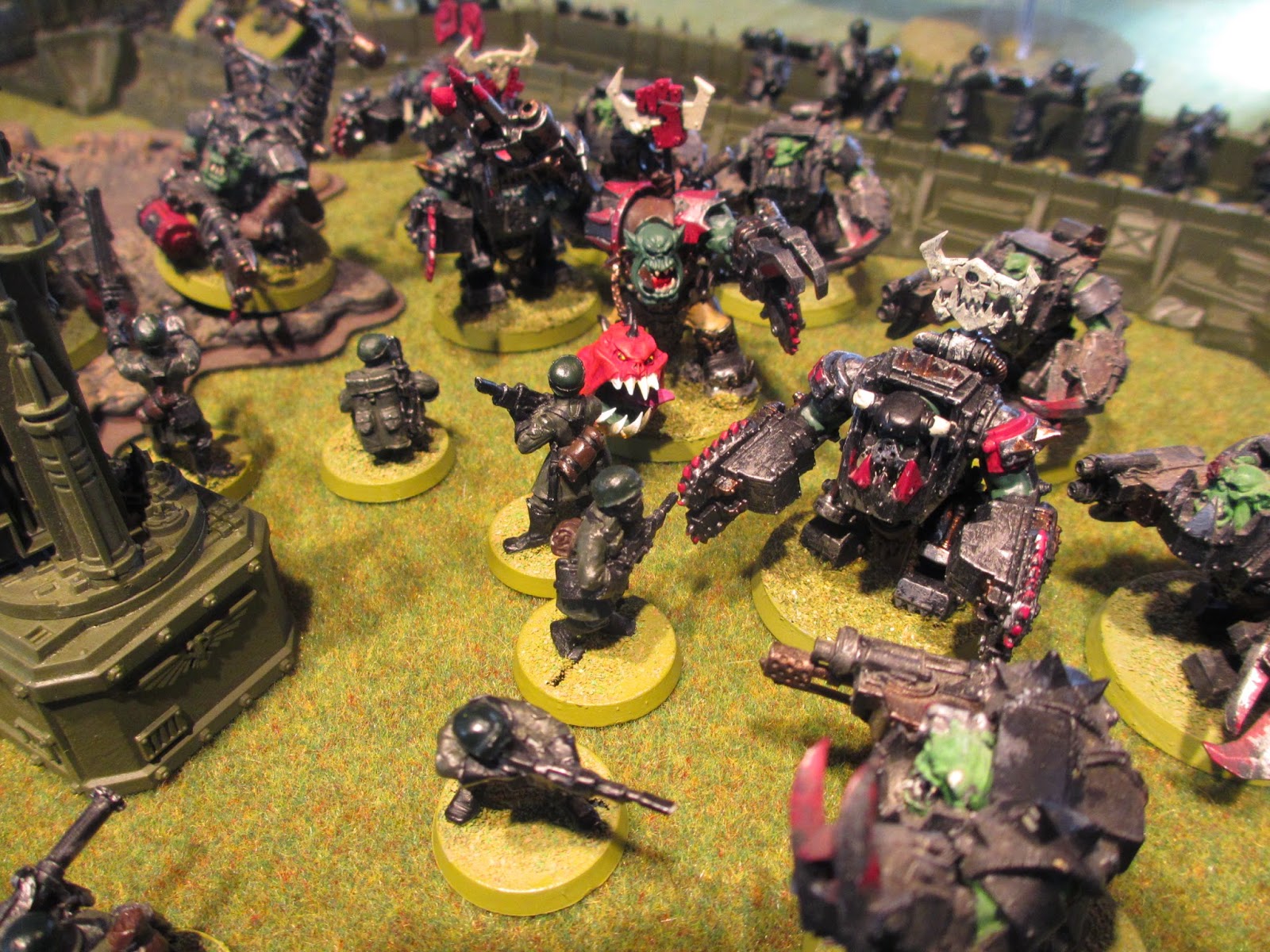 I took my lumps, and waited for the reinforcements to arrive. Sadly they came piecemeal and died the same way. Mrs. Blackheart was able to mass her forces and with a well timed Waaagh, spelled doom for the Knights and any hope for the defenders. 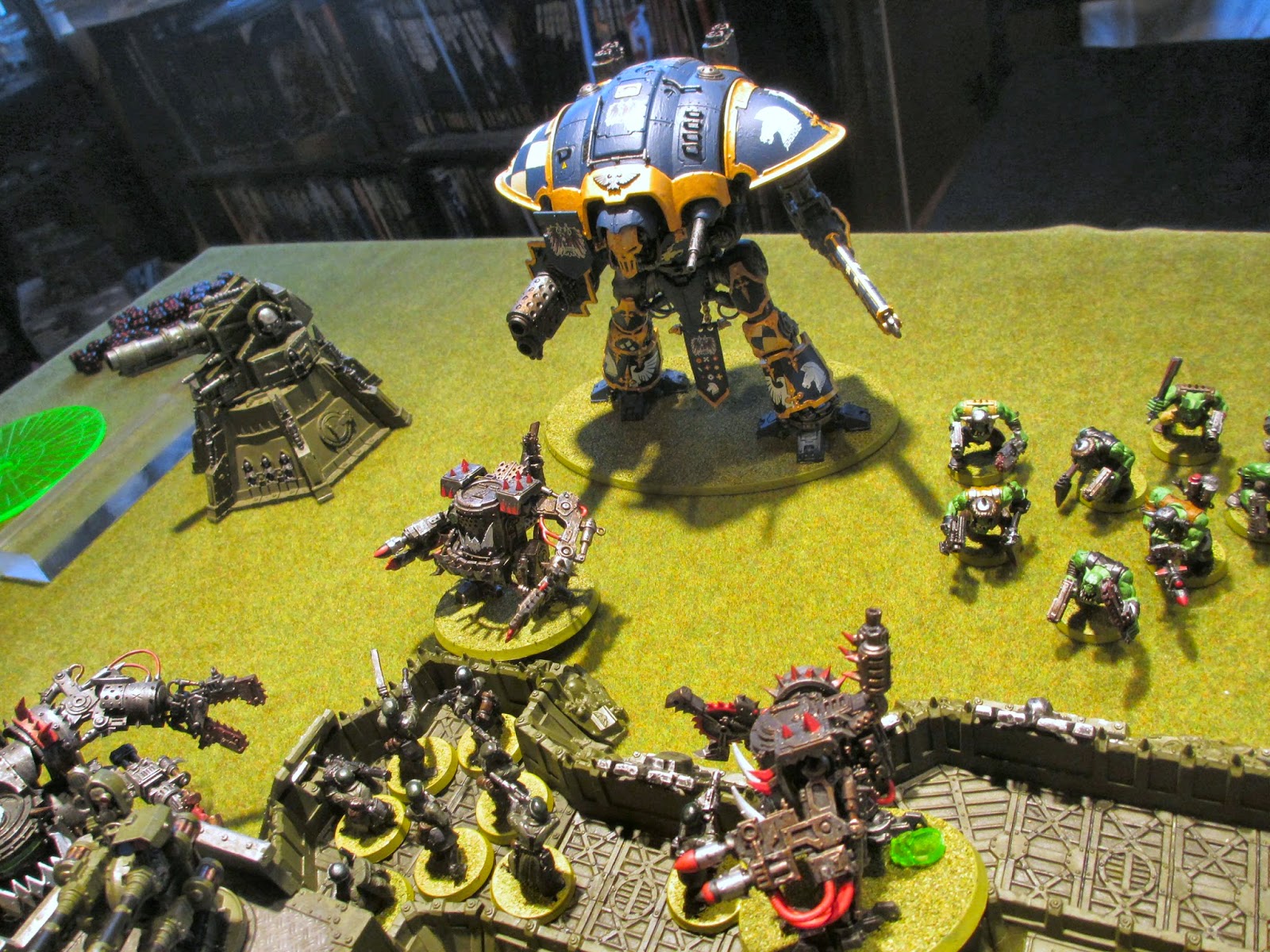 The Orks paid a very heavy price but in the end the Imperials ran out of troops first and the Firebase fell to the invading horde. 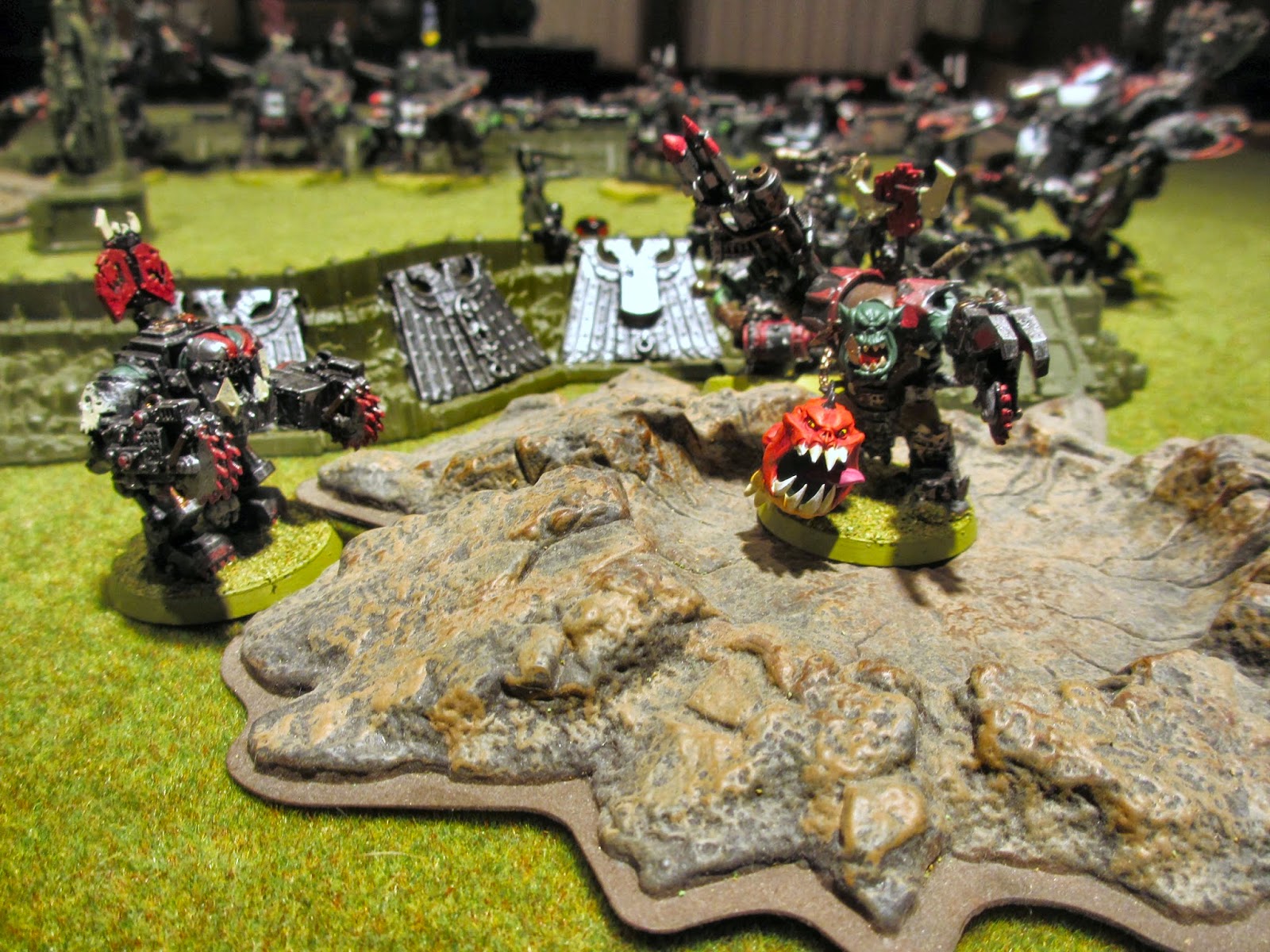 The battle did not go our way at all, but it was a tense, fast moving affair. It always seems to come down to reserve rolls. If the Knights had shown up together we would have had a real chance to hold onto the base and win. Maybe.


The Enemy is Upon us!
Orks:1 Imperials:0
Posted by Marcus the Blackheart at 1:12 PM 2 comments:

Another Year Closer to the Grim Darkness 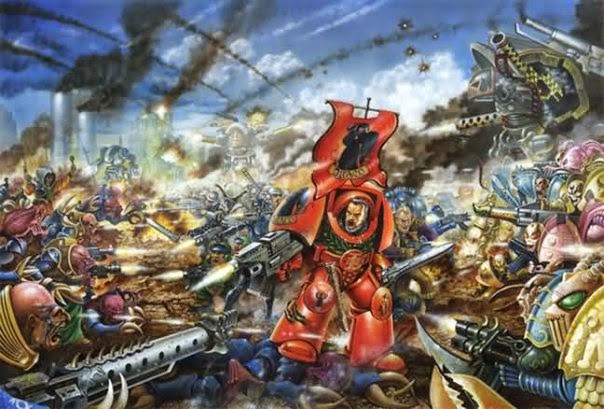 Happy New Year and all that! 2014 was a very good year for my gaming interests, I can't wait to see what 2015 brings. What new madness will GW unleash? Is Wizkids dumping Star Trek Attack Wing? Will Fantasy Flight Games run out of awesome gaming surprises? We shall see.

I have a bunch of 40K projects for this year (some left over from last year) and a slew of new games. Last year I started to expand the scope of this blog beyond that of just 40K, and I will continue to do so. In the wings I have All Quiet on The Martian Front, Mars Attacks, Deadzone, DUST Tactics, as well as some new board games. Is there a game that you would like to see more coverage of?  Let me know.

My blog goal for this year is to have a new post every Friday at least, more if possible. Lots of fun stuff will happen this solar cycle, I'm glad you are a part of it!

The Emperor Protects
But not against cheap champagne hangovers

Posted by Marcus the Blackheart at 9:27 AM No comments: