Battle Three of the Non-Human league turned into to two very lopsided games. Mrs. Blackheart's Farseer continued to see the wrong path to victory. The Ork's warlord kept up the hot dice and headlong smashing attacks. The battle's highlite was the clash of the Wraithlords with the Ork Deff Dread, Big Hugga, and the Warboss. 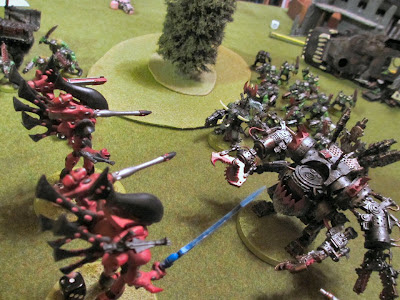 Big Hugga did not stand a chance as the Wraithsword split it in two. Mork (or possibly Gork) was looking out for Killjaw Grimjack this day as he felled a Wraithlord in hand to hand.
The game ended in a brisk five turns with a Ork massacre. On the other table, Hive Fleet Tiamat kept up it's momentum and crashed against the Tau's gunline.
The Tau's massed fire tore huge gaps in the oncoming swarms, but it was not enough. Far too many of the tide of 'gaunts closed in. 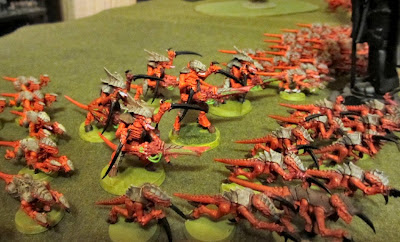 Then the Tyranid reserves arrived. Caught between a Trygon and a swarm of Genestealers led by a broodlord, the Tau sell their lives dearly, but are overcome. 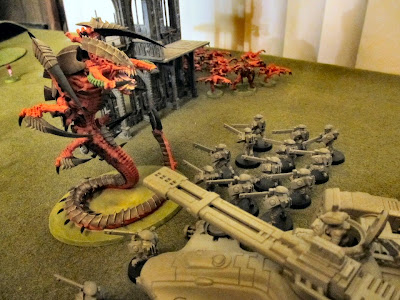 The Hive Mind achieve a Major Victory against the Greater (and very tasty) Good.

Next time, Orks slug it out against the Tau and the Eldar fight their Dark cousins.

Hive Tyrants through the Ages

As the brand new all plastic, tons of options Hive Tyrant was just released I thought I would do a brief history of the models.

1995. 2nd edition. I had and an assortment of  Tyranid warriors from Advanced Space Crusade, 50+ Genestealers from Space Hulk, a pair of heavy metal Screamer-Killers, and ten metal Termaguants. I was using the black and white Tyranid army list pamphlet that came with the second edition box set. Then the Codex that changed it all for me was set upon the world:

The Hive Tyrant was impressive, I bought two. I built and painted one in record time, the other languished in its box, and then was somehow lost. My Tyranid army of the time had a horrific red/blue color scheme except for the Genestealers, which had the dark blue/purple paint job from Space Hulk.

A short six years and one edition later: 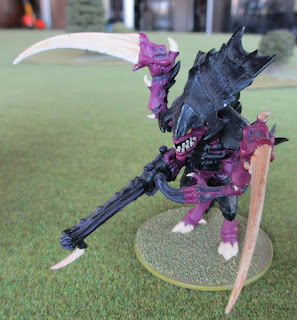 I really did like it's Queen-from-"Aliens" inspired look, although the body seemed too short for such a huge head. I managed to sell off all my old figs except for the Genestealers and my beloved Hive tyrant, and bought heavy into the new line of 'Nids. Hive Fleet Dagon sported a brand new paint job. A bit less tutti-fruiti, and more sci-fi horror.

Alas, the "Queen" Tyrant had a short run, for in 2005 came the biggest, meanest Tyrant yet. 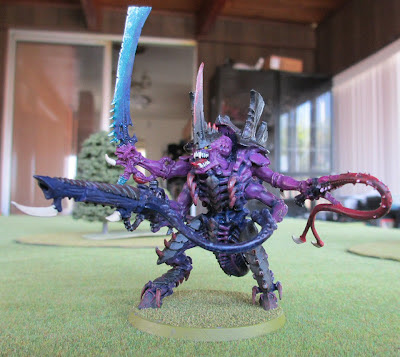 To me, GW finally got the Hive Tyrant exactly right, and is still one of my favorite figs. They brought back the Bonesword and Lash Whip from the original, and the twin rows of "vents" along it's back.

2009 and another new Codex, but no new Tyrant! I was not upset by this, but I did like the new HQ "characters" Swarmlord and Tyranid Prime. But no figs for them. Hmmmm.

In 2008 when we unpacked after we bought our house, I found a figure that had been lost in time and space.
While no longer a contender to be Tyrant, it would make a fine Tyranid Prime... 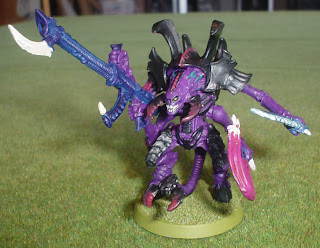 In January of last year I felt the call of the Swarmlord. After a few failed tries to make Bonesabers out of various things, I found some metal ones on the interwebs. It turned into a hellish build. Trimming down the plastic arms to fit the metal swords and then pinning them to the plastic arms just right was quite the ordeal. 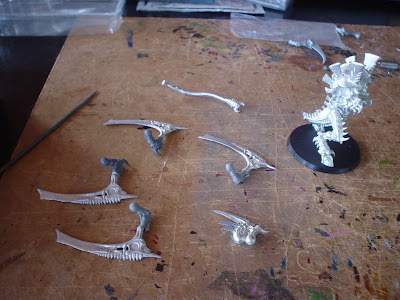 Then I worked on the head some, to better match the drawing in the Codex, and to be a bit different from the standard Tyrant head. 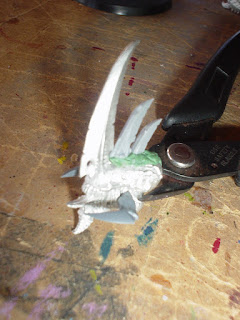 Some paint and ready to tear up the field. 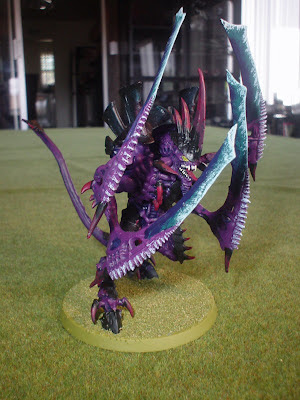 Of course the Swarmlord is now in plastic. I may swap out the metal/plastic arms on my Swarmlord for the new plastic ones, I'll see once I get the new model. I am looking forward to adding a new Tyrant to the family photo, one with wings!