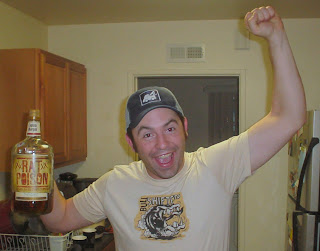 Inside he is an evil madman. He just had to go through the Tyranid codex and find The Doom of Malan'tai.
Then he made one and made us very sad with the life essence-ripping and the Cataclysm, and the stupid, stupid 3+ invulnerable save.

Many hapless Guardsmen, Eldar, Orks, and Marines dropped dead before this terror. So I did the only reasonable thing: I made one for my 'Nid army as well. And it was good.

I like the Doom. It is fun, and just a bit overpowered, and can be killed by a well place Krak missile. It scares people and they focus lots of firepower upon it, letting the other Tyranid critters to do as they like.

We have a new house rule for the Doom:

Bursting the Bubble: If the Doom suffers Instant Death by any means it explodes in a STR 4, S" radius explosion. S being equal to the Doom's strength before it suffered Instant Death. All non-vehicles in the blast radius are affected, friend or foe.

﻿
﻿
We have used this rule twice now and it is entertaining, so it will be staying with us.

Now Matt is eyeing the Tyrannofex...

Campaign Update
﻿The PDF made a heroic stand at the gates of the spaceport stopping the headlong Tyranid advance dead in its tracks.
The lead elements of the Armageddon 23rd Steel Legion followed with a armored breakout deep into the Tyranid lines.
Last Sunday saw four games played as the Space Wolves joined the fight. The Steel Legion fought two games against Matt and Gillian's 'Nids using an update to a old classic scenario, Tyranid Assault. The 'Nids have six turns to kill every defending model on the table. Starting on turn two any troops that have been killed may re-enter as soon as they have a minimum or more squad size. All other killed units are placed into reserve.
﻿﻿
﻿﻿﻿﻿
﻿﻿

The Steel Legion hung on to win both games, one of them by two Guardsmen and a Sentinel.﻿ Wolf Lord Jeff split his games with the Hive Mind. That makes the current score Imperium 5, Tyranids 5. Can the Imperial forces continue to rally? Will the Hive Mind regain the initiative? Only the dice know.
Posted by Marcus the Blackheart at 3:34 PM