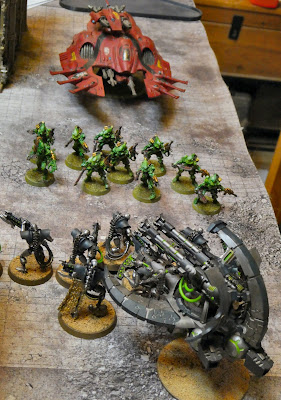 It was time for Mrs. Blackheart's Eldar-i to give the new Codex a try. 100PL vs. my Necrons.

Wow, those Space Elves can shoot! And use cheezy psychic powers, and high morale, and don't get me started on the Avatar...

The battle started off poorly for me and then went downhill from there. 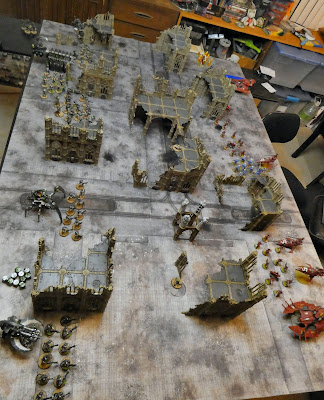 A standard cross the board and seize the three objectives type of mission. I even got to go first. Didn't do me a lot of good though.
All of the Aeldari units that got improvements, really kick butt. The Dire Avengers went to an Elite slot from troops, but their Avenger Catapults now have 3 shots. With the shuriken rule. Bad times indeed.
Fire Dragons are fast and extra-melty, Striking Scorpions are more stabby! Guardians with a 4+ save? What is the galaxy coming to?
Seeing the writing on the field, I decided to see if the Avatar was in fact, all that. I charged with a full 10-robot-thing squad of Praetorians, one of my favorite units. They did some good damage on the very molten god of anger issues. Just not enough.
The retaliation was suitably impressive. Eight very dead Praetorians, with the last two being wiped out by the lurking Wraithlord.
Fine. My Overlord decided to go all Leroy Jenkins and charge in. Of course, he didn't make it.
The Wraithlord shot him, charged him and thanks to some amazing saves, the Overlord survived, down to a single wound. Some days it's just handy to have a S9 melee weapon, and the Wraithlord was taken off the field. Next came the battle of Commanders! 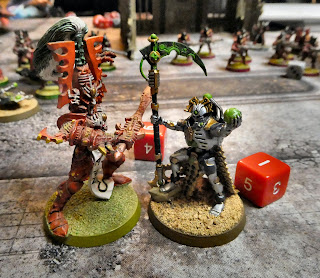 The Overlord continued to have some super hot saves, and did not die! Sadly neither did the Avatar.
The next and last turn, my plucky Overlord finally fell and the game ended in a rout for the Necrons.
The 9th edition Codexs continue to increase the power of armies. I don't think it is too much, but rather making some units are strong as we feel they should be. The Aeldari will be a worthy opponent!
Go Fight Some Battles
Just Roll Better Than I did

Posted by Marcus the Blackheart at 10:30 AM