Every Formation a Parade 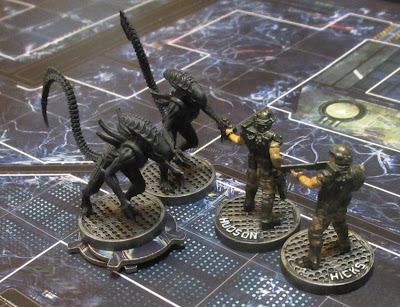 I got my groove on and slapped some paint on the minis from Gale Force Nine's ALIENS: Another Glorious Day in The Corps. My biggest decision was what color the Xeno Warriors were to be. Throughout the movies, they are black, blueish-black, dark green, and really dark green. Mostly. I went with dark green over a black basecoat, with dark grey for highlights. I think they came out nice. Dark and scary. 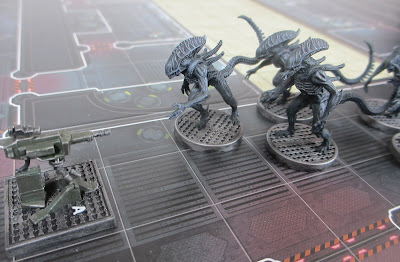 For the Marines I went with a "general feel" for their camouflage. Looks good from two feet away, and very nice for board game figures. The civilians were easy to match how they looked in the film. Except Burke: He was wearing a gingham pattern shirt. Not doing that in 28mm. Or any scale really. 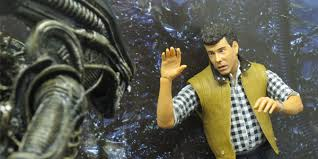 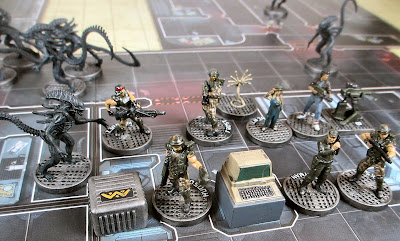 The figures from the base game. 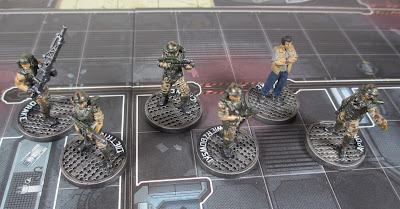 The figures from the Ultimate Badasses (and Burke) expansion.
All the figs painted up well enough. Not super detailed, but very nice for gaming. Having the characters names raised on the bases is a nice design touch and does make it much easier to tell who is who at a glance.
You may have noticed that the humans have a bit of a shine to them. For some reason the wash I used was on the glossy side, and I am out of dullcoat. As soon as I get some they will be knocked back down to a matt finish. No shiny Marines!
I am about to embark on assembling and painting the "Get Away From Her You B***h!" expansion. Power Loader and Xeno Queen! That'll be fun.
Go Fling Some Paint
And The Stack Will Go Down
Posted by Marcus the Blackheart at 1:34 PM