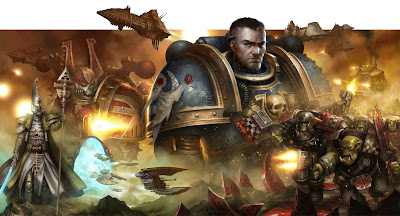 The juggernaut that is Fantasy Flight Games rolls on with another quality product. Forbidden Stars is a Warhammer 40K themed strategic level game of system conquest. It is set in the Herakon Cluster, which had been cut off from the rest of the galaxy by powerful warp storms. Now the storms have abated, and four races rush in to claim the systems of the cluster.

2-4 players choose from the Eldar, Space Marines, Chaos, and Ork factions. The game is up to typical high FFG standards, very nice cards, counters, plastics, and map sections. Each faction gets four different ground force units, and two starship types. Each unit represents larger, more capable and expensive units. For example the Marines have Scouts, Marines, Land Raider, and Warlord Titan.
The map tiles have a olde tyme cartography style to them, which fits in great with the 40K Imperial aesthetic. 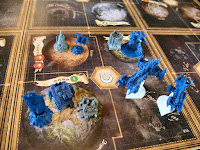 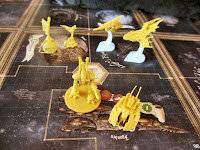 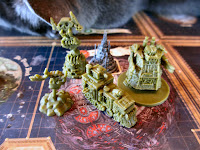 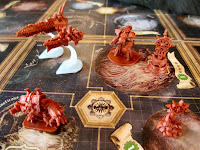 The game turned out to be a little more complicated than I thought it would be. That is not a bad thing at all. It has a easy learning curve, and pretty much falls into to place about 2/3 of the way through your first game.

The goal of the game is to claim a number of Objective Tokens, the number needed depends on how many people are playing. Each faction has their own specific Objectives scattered around the map. Each World on the map has ratings for how much material it produces each turn, how many units can be on the world, and any special assets you can receive from controlling it. Each World may also have a single Structure, these help with your tech level, defending the World, or being able build units in that system.

Each turn is made up of three phases: Planning, Operations, and Refresh. Of course the Planning Phase is the trickiest. So much hinges on the choices you make in this phase. If you did not plan to do something it does not happen. Gathering assets, moving forces, building units or structures, and buying upgrades all depend on you thinking ahead and giving the correct orders.

All this planning turns into action in the Operation Phase. Players take turns executing their orders, and if this leads to combat, this is when it happens. Combat seems a bit much at first, but it is a well designed and quick system. It uses cards (which are upgradable) and dice for resolution.

The Refresh phase is where some fun stuff happens, event cards are played (if you planned it!), material is collected from all the Worlds you control, and Warp Storms move about the map, cutting off some movement avenues, and of course you pick up any Objectives you conquered and see if you have enough to win. The game ends on turn eight if nobody has won yet, and the player with the most objectives then is the victor.
Forbidden Stars is a fun, polished game. The 40K-ness is done well but doesn't override gameplay. I look forward to many more plays of this one.
Highly Recommended to strategy fans.

Posted by Marcus the Blackheart at 1:36 PM 2 comments: 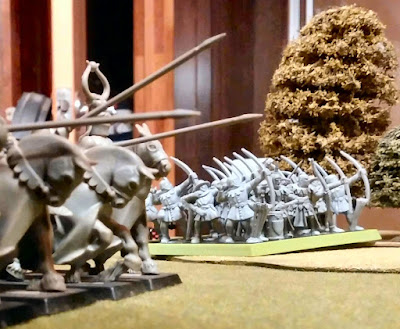 Forbidden Stars review on Tuesday. No, really. Today we will have a quick talk about Age of Sigmar. Famous Author Pete and I gave the free rules a spin the night before Comic-Con. Neither of us play Warhammer Fantasy Battles, so this will be a take on AoS just based on the current rules, not "how bad GW has screwed WFB players".

Pete has collected quite an array of Fantasy figs through time. I have some Beastmen (on round bases that are to be used in my mythical Renegade Imperial Guard Army) and some Chaos Spawn figs. More than enough for a test battle. It just felt wrong doing a not-even-primed battle report. Oh well, that's what rum is for. 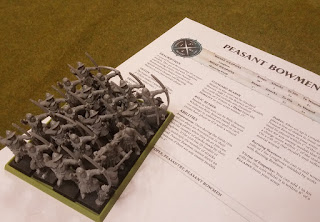 The four pages of game rules plus Battlescrolls (unit cards) for over a dozen armies are available for free on Games Workshops site. The rules are pretty straightforward, but do have a few soft points. The oddest design choice was the lack of points for any model. "You got some guys I got some guys, let's fight" is fine in theory but difficult in practice. Especially after decades of building armies based on points. So we chose a common internet fix, total wounds per side. it was easy and seemed to give adequate balance. I took 30 wounds of Beastmen, and Pete brough the Brittonians. 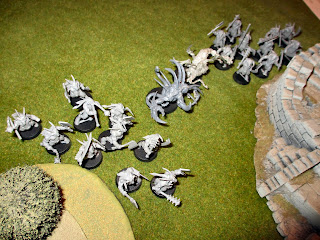 The game was fast and fun. the rules have a very familiar feeling, but do have some distinct changes. The Battlescrolls as a total info unit card work very well. They are handy and clearly lay out what the unit can do.
Like I said earlier, neither one of us play WFB, so I don't have any points of contention or comparison. As a 40K player, it seems like a very streamlined version, but not so much that it loses it's flavor. I've been told by more than a few people that WFB is a more strict and/or complicated game than 40K, so maybe the the Age of Sigmar rules are in fact closer to 40K than WFB.

I would have prefered to see a reboot of the WFB world with these new rules (and maybe some point values) but GW doesn't ask for my opinion, so I will not bother with things I cannot control or influence. Time will tell if AoS is a good move or the death knell of WFB.

Of course there has been internet outrage over this, but that is no different from any other time. I can't even imagine what the troll rage would have been like if the internet was as prevalent when 40K moved from 2nd edition to 3rd.

At the end of the day we are just playing with toy soldiers. Pick a set of rules that you and your friends like and go with it.

Overall, it was a good time. A fast and easy ruleset for when you want some fantasy combat time. It will be interesting to see where it goes from here.

Posted by Marcus the Blackheart at 12:34 PM 3 comments: